This week, intrepid Official Mascara Correspondent Ashleigh Ciucci takes on L’Oreal Paris Voluminous Power Volume 24H Black Smoke Mascara. Will it be as mystifying and impactful as the black smoke monster on Lost? Let’s find out. 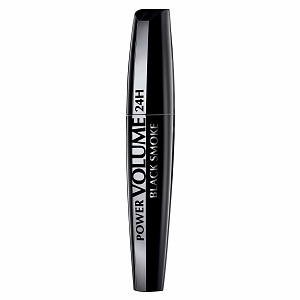 L’Oreal Paris enters into the super-long-wear market with a collagen-infused lash-plumping formula.  I’ve a big fan of Cover Girl’s LashBlast 24HR Mascara so I was interested to see how L’Oreal’s version would pay off. With a soft fluffy brush, this supple formula goes on easily and separates without too much work.  My lashes were tapered with a bit of curl but not a lot of volume.

With a second coat, my lashes were a bit dry but the formula still built up easily. I would say to make sure you’re happy with the shape that your lashes are in after one coat because the second coat doesn’t afford a lot of flexibility.

I was able to touch-up at the roots but the tips were too dry for the product to adhere. I went against my religion by not washing off my mazzie at the end of the day because I wanted to see how long the formula would wear.  I woke up with softly tinted lashes without any flaking or darkness under my eye.  It required eye makeup remover but I didn’t mind. While it didn’t quite live up to my Cover Girl standards, L’Oreal Paris’ 24H mascara is like its mellow cousin. I would buy this one to have long-wearing mascara options. —Ashleigh Ciucci