Official Mascara Correspondent Ashleigh Ciucci tests out the new L’Oreal Voluminous Butterfly Intenza Mascara, $11. Is it worth it because YOU’RE worth it? Read her review. 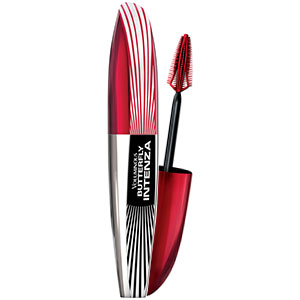 I’m a big BIG fan of L’Oreal mascaras, not to mention the multiple Voluminous members of their arsenal.  Nearly two years ago I reviewed L’Oreal’s Lash Out Butterfly Mascara and went bonkers for it, so I was interested to see what this Intenza version had to offer.  Similarly, this mascara has an interesting brush: oblong with both long and short rubbery-bristles.  The wells in between the rows of bristles hold a lot of the formula so one coat give fluffy full lashes.  There’s good grip and build of product but there’s not a ton of length happening.

The second coat is a bit dry but allows for major density and thickness.  My lashes curled easily and the brush pulled my lashes out, wing-like. By the afternoon, the crunchiness had softened a little so I was able to add a nice touch of dimension to the roots (no tips, they squared off too much.) While there’s not a ton of length happening, I liked the shape of my lashes. To top it off, this WASHED OFF WITH WATER!  Not even soap! Woohoo!

This mascara isn’t all that “Intenza” but it’s a great buy for a mazzie fiend!

Is this one you’re going to pick up and try? Tell us in the comments.