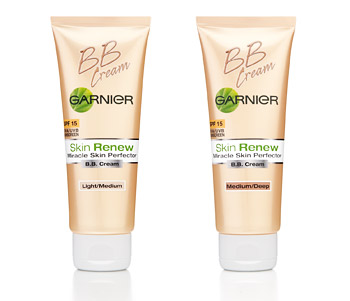 B.B. Creams are not so much popular as they are a veritable MOVEMENT these days. 2011 saw the introduction stateside of Boscia and Dr. Jart and now, Garnier‘s gotten in the game with their iteration, Garnier Skin Renew BB Cream Miracle Skin Perfector. Available in two shades, light/medium and medium/deep(at last! Garnier has recognized that a little shade expansion from the singular hue “vampire” was in order!), this beauty balm packs a powerful skin-tone evening, hydrating punch of protection. It’s even infused with Vitamin C to boost luminosity. After going through multiple tubes of Dr. Jart and Boscia, I’m elated that a drugstore version of my favorite all-in-one skin care savior delivers.  Read on…

And of course, every time I say B.B. Cream, the pop culture sieve that is my mind jumps to Almost Famous’ Jeff Bebe of Stillwater.

If you’ve been unimpressed with your go-to combo of moisturizer and foundation, allow Garnier B.B. Cream to be both your skin’s metaphorical frontman AND guitarist with mystique–simultaneously. Slather it on in the morning, cut your grooming routine substantially and revel in the fact that much like in the way of Russell Hammond, your looks will become a problem. In a good way. Plus, you’ll be controlling what’s happening [from an SPF perspective]. As Jeff Bebe sagely said, “there’s a responsibility here.”

That there is, golden gods and goddesses. To your FACE.