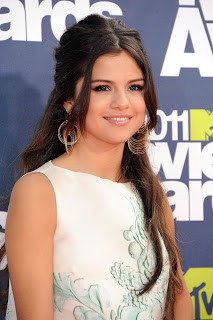 Celebrity Makeup Artist Karan Mitchell created Selena Gomez‘ beautiful makeup look for the MTV Movie Awards.
Said Karan, “For the MTV Movie Awards, Selena wanted her makeup look to be fresh and flawless. We went with a look that had a soft focus and pretty pink lips. Read on for more deets…
I started with Selena’s eyes. I selected the COVERGIRL Shimmering Sands Eye Enhancer 3-Kits Shadows for her shadow. I used the medium shade of the palette as all over the eye area. I then used the lightest shade on the inside corners and as a highlight under her brow bone.
I then lined her upper and lower lashline with COVERGIRL Perfect Blend Eyeliner in Basic Black. To line the upper lashes I used COVERGiRL LineExact Liquid liner in Very Black and drew a slight wing on the outer corners. I added a few individual lashes and used three coats of new COVERGIRL NatureLuxe Water Resistant Mousse Mascara in Black. This mascara will be available in-store nationwide in July.
For her flawless skin, I used NatureLuxe Silk Foundation in Oak. On her cheeks I applied COVERGIRL Simply Ageless Sculpting Blush in Lush Berry under the cheekbone and blended upward.
I then finished the look with COVERGIRL LipPerfection lipcolor in the soft shimmering pink shade Sweetheart and COVERGIRL ShineBlast Lip Gloss in Dazzle.”
LOVE! What do you think of Selena Gomez’ makeup look at the MTV Movie Awards 2011?