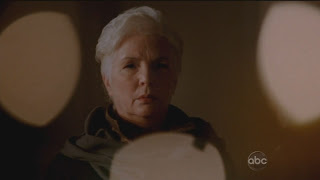 Doc Jensen (who I want to BE when I grow up) pointed out that the show’s title “Because You Left” refers to non sci-fi embracing (fairweather, in my opinion) LOST fans dropping off either last season or the season prior. I.e., because you left, we’ve now made it a full-on sci-fi SITUATION. And I’m totally into it. And obv, you, my geequals, are too. So on with the analysis. Here’s what I’ve got.

A clock showing the time 8:15AM (two of the NUMBERS! HA! These people think we’re amateurs) opens the premiere. The Dr. Pierre Chang/Marvin Candle/Mark Wickman/Edgar Halliwax opening scene is highly reminiscent of Desmond’s opening scene of the season 2 premiere in the hatch. Except, you know, that was totes novel at the time, and this somehow felt a bit like the writers were calling it in. Least riveting season opener yet, guys. I have high hopes for this season (there’s nothing I adore more than time travel) but compared to the other season openers… this one fell a bit flat. I mean, Desmond in the hatch, followed by the tailies, followed by Otherville, etc. Faraday as one of the Dharma Initiative-ers was kind of impressive. But overall, I wasn’t as jazzed about the opening scene as I usually am. But then again, LOST is like pizza, isn’t it? Even when it’s bad… it’s still good.

I did, however, enjoy that Pierre/Marvin/Mark/Edgar’s record (which plays Willie Nelson’s Shotgun Willie) starts skipping foreshadowing the skipping through time the castaways are in for. It’s all very Quantum Leap, n’est-ce pas?

Some things I noticed in the two episodes in no particular order:

Did Sawyer gain a little baby bit of weight? Is he eating his feelings due to separation anxiety from Kate?

The dad from My So-Called Life is one of the lawyers who comes to get blood samples from Aaron and Kate. BT dubs, his name is Dan Norton (on the show). Some googling tells me that Dan Norton is a comic book artist who broke through with Dark Horse. “Make sure to pack your True Religions, Kate,” my friend Lauren remarked as Kate threw stuff in a suitcase. Hilar.

Did you catch the references to Weekend at Bernie’s (unconscious Sayid rocking shades in Hurley’s car) and Garden State (when Sayid kills the dude on the open dishwasher)?

Thank the Lawd the Faux Steve Buscemi/Neil was killed right off. I have no time for that dude’s annoying personality all season long.

Eyeliner Richard ISN’T wearing eyeliner. It’s just so hard to accept. P.S. Emily told me that Nestor appreciated her dispelling the rumor that he rocks guyliner. And she told me HE READ THIS BLOG. Eyeliner Richard (sorry, Nestor – I can’t stop calling you that) READ BBJ. In the words of Rachel Zoe, I die. But anyway, is it not wild that Eyeliner Richard gave Locke his compass, one of the items he showed Locke in his Dalai Lama test from back in the day?

I think that at some point in time (ha!) during these flashes, the losties are GOING to run into their counterparts in an earlier timeline just as Marty McFly did in Back to the Future II.

Desmond needs to go back to Oxford University to find Faraday’s mother, who is clearly Ms. Hawking.

Nice bonded teeth, Ana Lucia. What dentist are you seeing in the afterlife?

Who is Jill, the butcher?

Why does Sun show Kate a pic of a baby Ji-Yeon, who should be about 3 by this point?

If the castaways are toggling through time, does that mean that Locke will at some point lose the use of his legs (unless that’s already happened thanks to Ethan) and Rose will again be sick thanks to course correcting?

And the REAL question: Why is that sexy Jack driving that fachachta chocolate mousse jeep? Can’t that dude get a better car? He’s a doctor AND a millionaire. For the love.

See you next week, LOST fans! Until then, it’s hairspray and lipgloss.