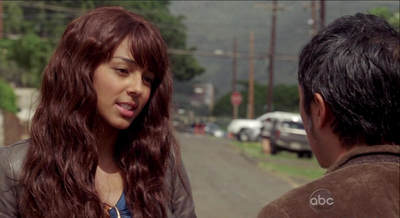 Great hair, Naom (can I call you Naom?) But it looks kind of fake, n’est-ce pas?

I’ve been delinq on these LOST posts y’all, and I’m hoping to remedy that the rest of the season. I hate to say it, but this is my least fave season thus far. The structure of the episodes (no flashbacks to pre-island existence, not a lot of character fleshing-out, nor too many film and literary references) don’t give me much to analyze, though I’m heavily into the time travel and sci-fi aspects. I sort of feel like I’m ambling along making guesses/theories just as we all are (and always have been) but I’m not as well equipped as I was before. You know? And since I didn’t have anything of note to offer, I simply didn’t bother. That said, last week’s episode was the best of the season (I thought) and I’m inspired to discuss my thoughts. But let’s start with this week’s ep, first.

My friend Carrie clued me in on this little gem: 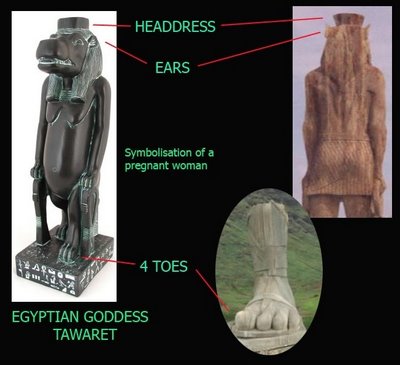 I’m not sure what does lie in the shadow of the statue, but I’m fascinated by the fact that it’s the Egyptian goddess Tawaret, a protector and often represented as pregnant. Could Eyeliner Richard really BE an Egyptian who arrived the island thousands of years ago and was involved in constructing the temple and statue? Doc Jensen had discussed that a few weeks ago. That would explain the eye liner, if nothing else. He is quite well preserved. Like a mummy, you might say. Also, is the fact that the statue is destroyed in the “present” the reason women can’t have babies on the island? Because in the 70s, babies were born without a problem. Exhibit A: Ethan. Exhibit B: Miles. What do you think?

3:16 on the microwave clock in the beginning is significant. First of all, the freighter clock showed this time last season. In addition, one side of Eko‘s stick in season 3 said “Lift your eyes North John 3:16. Also, there’s this biblical passage: Luke 3:16 John answered, saying unto [them] all, I indeed baptize you with water; but one mightier than I cometh, the latchet of whose shoes I am not worthy to unloose: he shall baptize you with the Holy Ghost and with fire. Interesting, hmm?

Hurley rewriting The Empire Strikes Back reeks of Old Biff stealing the Sports Almanac in Back to the Future II. And remember how well that worked out for him.

Bram: Bram Stoker is the author of Dracula, the most famous “undead” person in literature. Stoker also wrote The Lair of the White Worm and The Jewel of Seven Stars. The first is about an ancient serpent living under an English manor, leading its inhabitants to the occult. The latter is about an attempt to reanimate an Egyptian mummy. Egypt is quite the theme of this episode. The lesson Jack erased from the classroom board was about ancient Egypt and hieroglyphics. Hieroglyphics, as you know, are also found on and around the temple.

If we’re alluding to The Sixth Sense with all this “I see/talk to dead people” stuff, could it be that Hurley really is dead? Remember, Miles is being sent to the island to talk to dead people to find Ben. Are the dead people we’re referring to the LOSTIES? Could the rumors of the Island = Purgatory be true (though Damon Lindlof and Carlton Cuse have denied it)?

I’m pretty sure everyone guessed that Marvin Candle/The Dude from the Videos/Dr. Pierre Chang is Miles’ dad. But I thought it was interesting that Miles caught a glimpse of himself as a baby (Baby You, as Hurly put it). I sort of thought someone might, I don’t know, quantum leap immediately or something if they encountered his/her younger self. Also, I am so not surprised to see that Miles was pretty emo/punked-out/pierced in the 90s. I love that Hurley called Dr. Chang a douche.

Speaking of douches, I’m so glad Sawyer/James LaFleur punched out Phil. I’m so not into that guy. Also, re: Sawyer, THIS is the funniest thing in America.

Also! I’m glad we finally found out what that $3.2 million Miles demanded of Ben was about last season. Apparently, it’s just double what Naomi was offering him to find Ben.

I thought Miles’ and Hurley’s witty banterous dynam was very Dorothy and Rose of The Golden Girls. Right?

I love that the actress who played Moushumi in The Namesake was cast as Ilana. In that movie (which by the way, you NEED to see), she said one of my favorite lines. Ever.
Gogol: How’d you get so sexy?
Moushumi: (matter of factly) Paris.
Because sort of just what HAPPENS in Paris.

DID BEN KILL PENNY? Or Desmond? He says for Sun to tell Desmond that he’s sorry… I’m assuming he means just for shooting him, which he it would seem he survived (when he drop-kicked Ben into the water). But his proven sympathy for moms would imply that he left Penny be once he saw D & P’s child.

Confirmation that the whispers are indeed the harbinger of danger: “If you hear the whispers–RUN,” Ben said to Danielle Rousseau as he kidnapped her baby.

Cra that we now have proof that Ben DOES remember getting shot as a child (which happened in what I will refer to as the new 1977) and being healed at the temple.

And that’s all I’ve got for now, folks! Tell me ALL your theories and thoughts. Go!