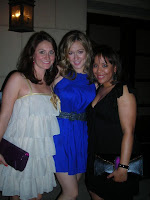 Marina, me, and Daneen in L.A. Daneen hilariously pointed out we much resembled another L.A. trio that night: Tai, Cher and Dionne.

I’m so TWO WEEKS ago with this, dolls. When I was in L.A., I had my hair done at the Total Beauty offices by the fab Lorenzo of the Warren-Tricomi Salon. Just so you know, that is where many of The Hills gals get THEIR hair did. I’m just saying. So Lorenzo fixed up my hair by blowing out the kinks before curling it with a large curling iron. Unfortunately, the photo above is actually the day AFTER Lorenzo worked his magic… I don’t have one yet of the day of. He made me into such a Farrah Fawcett-Kate Hudson hybrid, I actually got compliments ALL night.

Added bonus: Lorenzo is so phenom to chat with. In the span of ten minutes, we’d discussed the upcoming SATC movie AND the new Madonna album, which wasn’t even available at the time, but he of course had access to the songs and already had chosen faves. I had to inform him I’m in the second shift when it comes to Madonna news – after the gays, who are first… but I seem to catch on by the time the teen girls come around to it. “First the gays, then the girls, then the industry.”

Thanks to Erika for taking the pic for us!