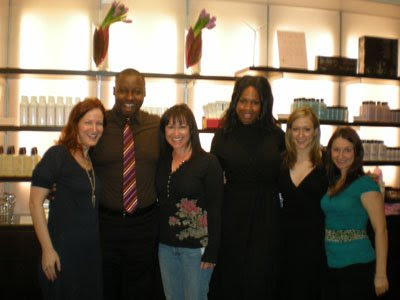 Last night, TotalBeauty arranged for some bloggers to have an “unplugged” interview with Ted Gibson at his Fifth Avenue salon. I finally got to meet Tia Williams and Risi-Leanne Baranja and caught up with Erika, Kristen, Marina and Anne as well.

I have to tell you: I adore that Ted. He is so calm and unaffectedly real. He’s a little baby bit shy and punctuates with his shoulders. I learned last night that he’s originally from Texas, has a father who was in the military, and even played football in high school. After high school, he studied fashion before delving into the beauty world. He’s as sweet as his beloved wild orchid extract which makes a cameo in nearly all of his products’ ingredient lists.

Ted gave us the scoop on his upcoming hair product happenings. In case you aren’t well-versed in Ted’s products, let me school you. They are nothing short of phenom. They all smell divine, really WORK, and are beautifully packaged. He noted that it’s very important to him that his products look good and deliver. I.e., they’re good on the inside and the outside. It’s true in beauty and it’s true in life, isn’t it dolls?

Ted discussed some new products he’s creating that are slated to hit shelves in late summer 2008. There was talk of a protein line, an oxygen line (I love me some O) a frizz and shine serum, a wax, a pomade and a spray gloss. But I’m most excited about a dry shampoo he’s creating which he cryptically said “is neither an aerosol, nor a spray.” It is, however, colored for different hair hues and will be delishly scented. I told him I simply cannot wait for that. I’ll keep you posted. Lastly, he’s going to be coming out with a candle called Potential Beauty which will incorporate blood oranges. Yum, yum, yum. Potential beauty stems from Ted’s belief that ALL women have the ability to be beautiful. His goal is to help women “see the beauty in themselves, be it their jawlines, the back of their necks, or cheekbones.”

Stay tuned for a Goodnite ($200) treatment (left) review. I was secretly hoping I’d get to try some out and lo and behold, it was included in our gift bags.

Thanks so much to TotalBeauty for this FAB opportunity! And thanks to Anne for the pic (above)! Pictured (L-R) are: Anne, Ted, Erika, Risi-Leanne, me (with my new blonder hair!), and Marina.