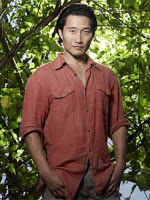 I successfully predicted that Sun makes it off the island AND I still think that Jin dies. Even though it pains me. Last night’s LOST episode moved me to tears, friends. I heart that Jin and his full character realization arc. But most of all, I heart his covetable cheekbones. As my mom says, he IS two walking cheekbones. He’s one of my fave characters. I clapped for him when he successfully asked Jack to pass the cereal in English.

Did you notice that Jin’s tombstone indicated the date of death as 9/22/2004 — the day Oceanic 815 crashed? But my roommate Carrie pointed out that there was an additional date in 1980… anyone know what that’s about? There was a third date of 1976, presumably the year Jin was born. I’d love to know what you think.

I was STUNNED when that bitch Juliet informed Jin that Sun was having an affair what may as well have been one million years ago. Come ON, Juliet! She totally deserved the slap in the face that ensued.

Captain Gault is an ornery character, n’est-ce pas? I’m not as up on my Ayn Rand as I should be (although I have read The Fountainhead). Thanks, Jeff Jenson for including this info in your EW column:
“There’s a John Galt in Atlas Shrugged, written by Lost-cited author Ayn Rand. In Shrugged, Galt is a mystery man who has invented a powerful new source of energy and has vanished off the face of the earth. Turns out he and some other ‘captains of industry’ (Wikipedia’s phrasing) have formed a secret society in Colorado. I’m not a Rand guy; never read the book. I’m certain that connections could be made here to Dharma and the Others, Ben and Widmore.”

Jeff Jenson also points out (referencing Wikipedia) that Captain Gault is also the name of a maritime adventure hero created by writer William Hope Hodgson. Captain Gault is a ”captain for hire” who is ”highly placed in a secret society….In general, he reveals himself to have surprising reservoirs of specialized knowledge. Where he got all this knowledge is generally not revealed; we get only these tantalizing hints at the character’s past. Much like the structure of LOST itself, right?

Regina is seen reading (upside down) The Survivors of the Chancellor: Diary of J. R. Kazallon, Passenger. It’s an 1875 novel written by Jules Verne about the final voyage of a British sailing vessel, the Chancellor, told from the perspective of one of its passengers (in the form of a diary – does this not remind you of the Black Rock ledger?). At the beginning of its voyage, the Chancellor carried eight passengers and twenty crew members. By the end, only eleven people (five passengers and six crew) remained alive. The rest killed themselves after going mad. Quite self reflexive that Regina should be seen reading this. Could Regina be the R.G. on Nadia’s bracelet? Maybe that’s why she committed suicide…

Sayid uses his taloned-beyond-comprehension hand to shake the hand of Kevin Johnson who is MICHAEL. The bloodstained wall scene was somewhat reminiscent of the bloodstained Hatch where Radzinsky blew his brains out.

The Flash-Forward/Flashback Fake-Out
I totally fell for it. I have to say, I noticed that Jin’s enorm cell phone was kind of 2001… but I simply chalked it up to cultural differences because he was in Korea. LOST, you won this round.

The Stuffed Pandas
Represent the show’s black and white/dark and light theme. Also, Bernard tells Jin they are the “good guys,” an oft-uttered phrase on LOST.

Who funded the 815 crash? Whose bodies did they use for the fake-out? Where IS WALT? And can Sayid cut his nails now that he’s in a semi-civilized place? Thanks.

2 Comments → LOST Analysis: Everyone DOES Love a Panda.