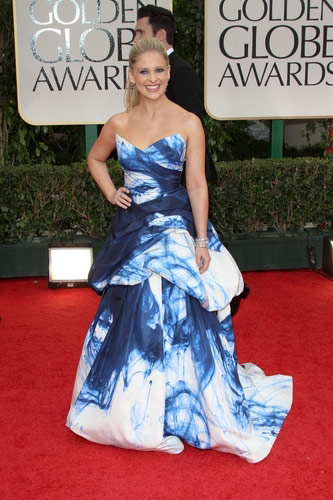 Fictionary is a column showcasing beauty- and pop culture-related words that don’t exist, but should.

Listen. I love Sarah Michelle Gellar. I love her hair. I love her searingly bitchy character in Cruel Intentions. I’ve watched umpteen hours of her as Buffy. I love that she and dead sexy husband Freddie Prinze Jr. are delightfully low-key. I love that she admitted on national television that the Golden Globes are officially the worst date night ever. I thought her hair that night looked amazing, as did her makeup.

I do not, however, love that dress.

After she beamed on my screen talking to Giuliana DiPandi about how her two-year old daughter picked out that art-class nightmare of a dress, I dry-heaved audibly at my television, seeking solace from my fashionable friends on Twitter. And in my moment of need, my dear friend Hy (married to JD of Hanky Panky fame) @-replied me when I’d tweeted that I LOATHED her gown but adored her genuine moment of menschiness with Giuliana when she told her how much she respects and admires her. Here’s what Hy said:


“I totally caught that also. Makes up for that dye-staster dress. #payitforward“


Dye-saster, friends. It’s the Fictionary word of the week, courtesy of Hy. Does it not say EVERYTHING?

What did you think of SMG’s look? Yay or nay?