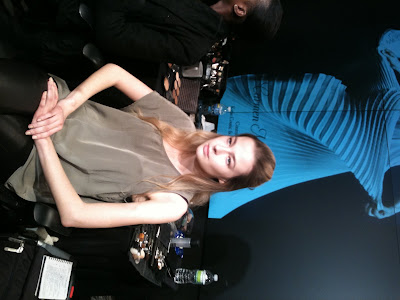 Hairstylist Devin Toth for Ted Gibson points out that the look is “soft, not as lavish as a typical ballerina.”  The hairstyle is half-up, with a little twist in the back to show movement. Devin used a curling iron just on the ends of the hair for bend. He prepped the models with Hair Sheets Styling and sprayed some Beautiful Hold Hairspray to set the look. Devin added final touches to the ‘do by pulling out wisps in the front and finger-combing in the back. Read on for all the makeup details… 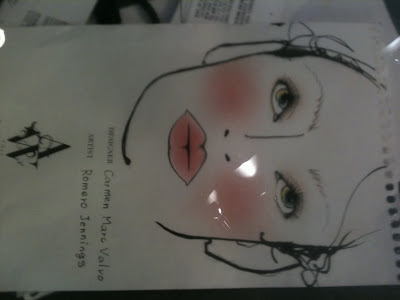 Romero Jennings, MAC Cosmetics Senior Makeup Artist and one of my FAVE backstage buddies, created a ballerina chic, subtle look. Said Romero, “The girls need to look fresh! It’s about movement, a little makeup dance,” he explained. “The hair is free, everything is so wearable: this look is suitable for anyone.” MAC Haute and Naughty Mascara really opened up the eye. MAC Eye Pencil in Fascinating was used in the waterline, a beautiful white pencil. A thick, glossy Crème Color Base, an ashy taupey grey hue was also used to define the eyes. Said Romer, “The shade is a sort of  rusty steel.” Romero used a new creme blush that flatters all skin tones in a pretty medium pink. Advised Romero, “If you just tap it on, it’ll give you coverage as well.” This is a good one for me, as I get non-T-zone blemishes all the TIME. This one boasts coverage plus blush; one stop shopping. The warm flush evoked a warmth from dancing. To apply, Romero had the models smile, before he applied blush to the apples, then brought down the blush using a brush onto the lower cheek in a singularly Bob Ross move. He then highlighted with a bit of Cream Color Base and on the bridge of the nose to highlight the reflections coming in through the windows of NASDAQ, where the show was held. A little blush was dabbed onto lips as well. “You can do more with less,” explained Romero. A new sheer iridescent barely pink crème sheen gloss was brushed on top of the blushed lips. “Brows were defined, because ballerinas’ brows are typically a bit more dramatic, to infuse some expression as they dance,” stated Romero. He arched and extended the brow a bit into a “beauty brow,” to polish this neutral look a bit.  Skin was prepped with the upcoming Matchmaster Foundation from MAC, which adjusts according to your skin tone.

This is DEFINITELY a look I’ll be rocking come fall. What do you think, beauties?