Backstage, we bloggers were lucky enough to score an interview with Chris Benz himself about his Fall 2011 collection, inspired by the idea of Savannah and haunting beauty. Said Chris, “t’s a blend of old southern decorum/society mixed with younger art school girl. That’s the impetus for fall.” The designer has been going once a month to Savannah to mentor students at SCAD, Savannah College of Art and Design. This collection is darker than his past ones, as Chris was struck by the idea of haunting beauty, drawn from  gorgeous graveyards and Spanish mosques. “Swampy colors, with hits of intense pigments,” Chris specified. His favorite item from the line? “There’s some really gorgeous printed long gowns that look really spooky Savannah special!” Read on for details on the beauty look… 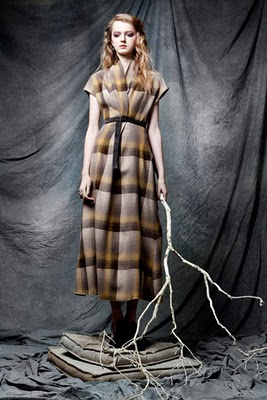 Skincare: Eileen Harcourt prepped the makeup with Clarisonic, using it on the lips and all over the face. She used the red Mia, as it was festive for Valentine’s Day. She also ran the Opal over the models’ eye areas despite the fact that they look younger than Justin Bieber. The rough Fashion Week schedule leaves ample room for puffiness.

Makeup: Daniel Martin for Lancome based the makeup concept around a great blue eyeshadow, combining Teal Fury and La Cherie palettes. Said Daniel, “It’s a little slept-in, can be applied with the fingers.” Daniel and his team took the color underneath the eye and on top and then smudged for good measure. Daniel pointed out, “It’s even better if they come in with a smudged look from a prior show, I’m asking the makeup team to keep it and incorporate.” Brows were filled in a bit, but nothing was too structured. Cheeks were cut a bit with Mauve Coquette Blush. “PJ Harvey is our muse, she’s so iconic with her blue eye shadow,” explained Danie. “She’s refined but a bit off, that’s what we always think of the Chris Benz girl.” Chris wanted the look to be a bit messy, not quite as preppy as their past looks.

Nails: Nail technician Ana Marie polished five of the models’ talons with a Michelle Mismas–pronounced “man-killer red” called Bang Bang Red by Lancome. The rest of the models’ tips were adorned with Lancome’s Noir 29, a black lacquer with gold sparkles. “We’re shaping the nails for the black a little more square to be a bit more extreme,” Ana Maria explained. “The red is a bit more round and longer.” Only one coat of the black was necessary, as its well-pigmented enough to forgo multiple coats. A glossy topcoat showcased the shimmer.

Hair: Happy Valentine’s Day to ME, because next I hit up the talented John Ruidant for Redken. He created a down, flowing hairstyle, more full through the sides, with the ends straightened. The stylist prepped models with Redken Hot Sets after blow-drying Rootful in for amped up texture. “Hot Sets locks in the wave,” explained John. Then, he went in with a one inch curling iron, went one and a half times around the curling iron, then alternated it halfway down the hair shaft going the opposite way, then used the curling iron as a flat iron the rest of the way down the hair shaft. Why wouldn’t a John Ruidant-created ‘do require me to write a totally ungrammatical run-on sentence? It’s always a several-step process with this guy. Said John, “Then, after it’s cool, you brush it through and use your fingers to backcomb and break up the wave.” The ‘do was sectioned via a side-part, then finished it off with Redken Forceful Hairspray for “airiness” and hold.