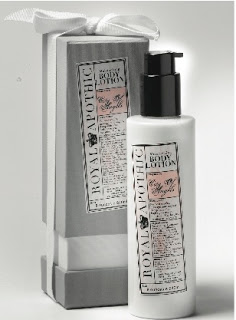 LA vs. NYC: I maintain there’s usually no question as to which is the better city–but this winter has me feeling a little less on Team Gotham. The pace trumps the weather for me, but after several blizzes and rocking my Sporto boots 98% of the time in the last month (memo to Mother Nature–I’d like to wear my heels once before spring thaw, mmkay?) I have to admit that the City of Angels is the place to be in January 2011. Unfortunately my business slash travel plans don’t include southern CA, so I’m turning to my new fave body moisturizer, which captures the left coast’s essence beautifully. Royal Apothic Bathe Body Lotion in City of Angels ($22) boasts gorge packaging, first off. The backstory: When British Royal Apothic founder Sean O’Mara first moved from England to LA, he was taken with the singularly intoxicating scent he discovered driving through the Hollywood Hills. Since creating his epic brand (inspired by an 18th century apothecary manual he discovered at an antique shop), he figured out a way to bottle the signature LA fragrance by incorporating the scent of a fresh sea breeze with eucalyptus (MY FAVE note), night blooming jasmine and an ozone note for that City of Angels hint of smog.