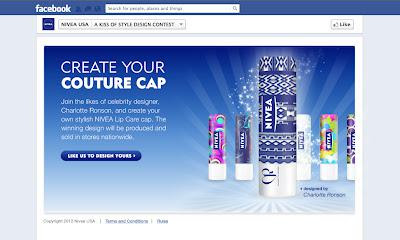 Fancy yourself a packaging pro? Nivea is launching its “Kiss of Style” Cap Contest so anyone can personalize her favorite Nivea Lip Care products. Read on…

Designer Charlotte Ronson got in on the action, too, creating packaging inspired by the geometric designs of her Fall 2012 collection. Can’t wait to create your cap? You’re in luck because starting today, you can create your cap using an extensive list of colors and design elements ranging from graffiti to stripes. Charlotte will select the top 10 finalists, with the winning design appearing on shelves next year. Entries will be hosted on NIVEA’s Facebook page through August 22, where then Ronson and a panel of judges will select the top 10 finalists. On September 5, the finalists will be announced and then consumers will be able vote for their favorites on NIVEA’s Facebook page. The winning design will be announced on September 20 and will be sold in 2013. Create your own cap on Nivea’s Facebook page.

And if you’re in the market for a new natural ingredients-infused lip balm, Nivea’s new Olive Oil & Lemon is delightfully subtle yet hydrating. But my favorite is the Nivea Lip Balm in Star Fruit Cherry, which imparts a tinge of rosiness that keeps guys guessing if I’m wearing anything or just naturally flushy.

What are you rocking your lips this summer?