I’m not a tattoo gal, though I recognize that certain iterations on certain people can be beautiful. I actually considered getting one briefly after being enchanted by Zoe Kravitz’s gorgeously dainty ones at a perfume event for a scent she was promoting. They were truly the equivalent of delicate jewelry. I think Angelina Jolie, below, pulls off the look well. But sometimes, we can all agree that the body art that seemed like a good idea in, say, the ‘90s turns out to be less so in the current millennium. 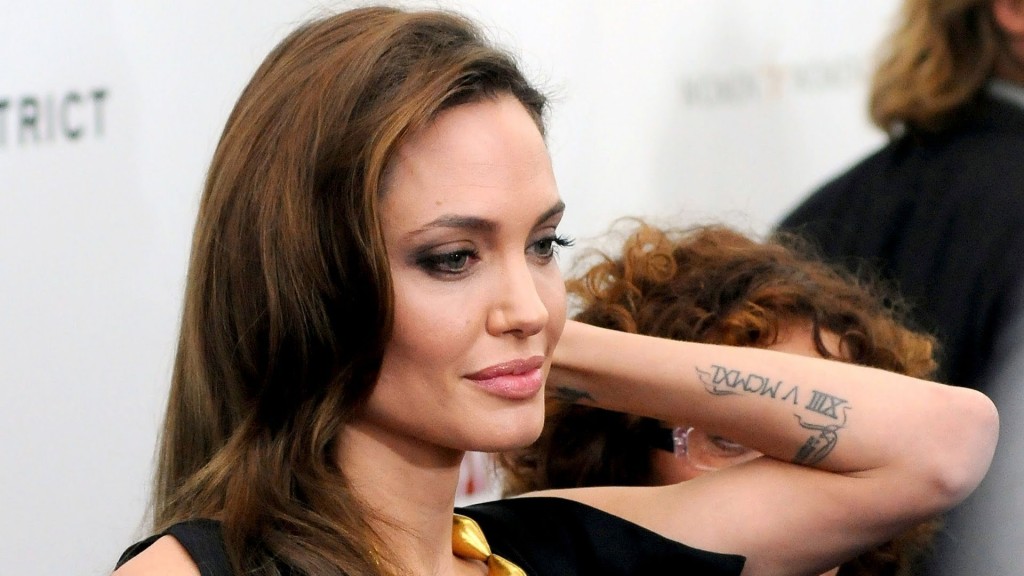 Story time: I once had a friend who had launched a massive campaign in high school to get a celestial-themed tattoo around her navel because of all of her friends in high school were getting one. It was pretty gigantic, but she did have the luxury of being able to cover it up if need be, due to its geography. I don’t think her parents knew about it for years. Then, she met a Jewish guy in our building (she was born Catholic) and in an effort to pursue an eventual marriage and religious conversion all while not seeming like the stark shiksa contrast she was in light of his Holocaust survivor grandparents, she set about getting her badass body art removed in her mid-twenties, a lengthy and expensive and even painful process. She also changed her name, her job and her personality, but that’s a separate story for a separate time. This was about ten years ago, but since then, there have been considerable technological advances in the tattoo-removal space and if you happen to be someone who maybe made a little ink mistake in the past, this post is for you.

“Q-switched lasers used to be the norm and now technology is moving beyond that to deliver energy faster for removal,” says plastic surgeon Dr. Michael Kulick. Q switched lasers and the tech is now moving beyond that. They’re trying to deliver energy faster.” Here, I talked to him about what you need to know before you laser, just how much body art is erasable and more.

Rouge18: Is it reasonable to expect a total removal or just a massive fading of body-art ink?

Dr. Michael Kulick: It depends on many factors: The skin color, who did the tattoo — whether it was something your friend did or the work of a professional, where on the body the tattoo is, etc. For example, the ankle is more difficult because the skin there is very thin. Color is another factor. Yellows, greens, and ink that’s a fluorescent shade are more difficult to get rid of than the typical “I love Sally” tattoo in black ink. That’s the gamut of variables in terms of person, location, tattoo. It also depends on the device used to remove it. An old fashioned ruby laser could have removed a black tattoo on a white person’s skin, but that would be a difficult thing for the hard-to-remove hues I mentioned. So it also depends on technology. You may have a great result, but your friend with rainbow on her ankle may not.

R18: How does the removal process work?

The process requires energy is being delivered to the skin. It’s being delivered to a certain target source. The medical term is selective photothermolysis. It acts as a magnet that’s attracted to darker colors.  There are lasers called tunable dye lasers, but they don’t necessarily have the power to supply the burst of energy. How it works is that we’re trying to deliver the burst of energy as fast as possible so that the large fragments of ink explode. Think of it like this: Your cells are like little Pac Men. They’re called macrophages, if you want to be scientific. They gobble up these fragments of pigment. That’s the sequence of events. This energy that goes in, has to be attracted to the color and you want to break up the pigment into tiny fragments so that the body’s reaction is to gobble up those fragments like Pac Man.

R18: How much does it cost to get a tattoo removed?

MK: A series of treatments is necessary, but it depends on many factors, as mentioned above. It can be taken care of in 3-4 sometimes, other times it may be as many as 10-15 sessions. Darker skin, Fitzpatrick 4 or 5 is more difficult for tattoo removal. The cost varies as well. A small butterfly tattoo will cost less an entire arm tattoo. The range is about $250 to $2000 per treatment.

MK: It’s simple, just putting a cool compress on the area and treating it with topical ointments if you do get crusting or scabbing. That can occur depending on how aggressive the treater was. Usually the sessions are spaced approximately 6-8 weeks apart. I wouldn’t do it sooner, it depends on all the variables and technology. That’ll determine the time of healing in between.

Pain is relative. Some people think a dentist appointment is excruciating. To compare it to other technologies, it’s analogous to laser hair removal, as that’s another light source but one that targets hair. It’s about the same level of pain as that, maybe a little bit more. It depends on surface area, as well. Treating an entire back is a long day and would hurt. A small area, like the bikini line, may not be as painful.

Dr. Kulick says that researchers are trying to come up with topical creams to do the work of these lasers. “These creams would have to penetrate all layers of skin to get into the deeper dermis without affecting the pigment in the skin,” he says. But, as in the case of flying cars and Hoverboards, we’re not quite there yet. Here’s to hoping removal will be as swift as that in the coming years.