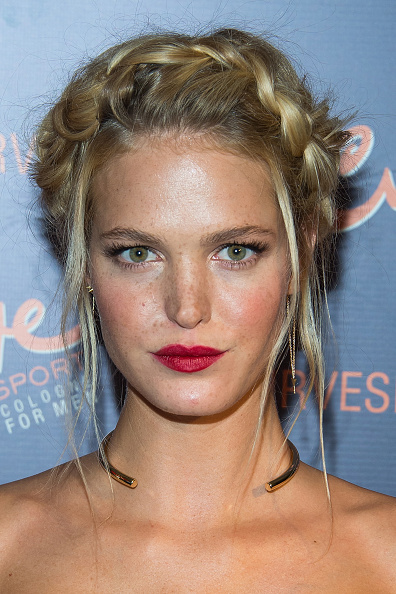 Hairstylist Jennifer Yepez created this modern milkmaid ‘do for the stunning Erin Heatherton’s Curve Sport launch appearance. Here, she shares how to get the look.

“I began by applying Oribe Maximista Thickening Spay as well as Oribe Grandiose Hair Plumping Mousse throughout the hair.  Then I blew the hair dry using a large round brush.

Next I created a middle part all the way through the back of the head, dividing the hair into two sections.  I took a large silver clip and pulled one part of the backside away so it did not get in the way when I began the braid.

After sectioning the hair, I began the braid from the back.  (Both a regular braid or corn row type of braid works.)  I took the braid around the head towards the ear and the front, continuing to braid loosely until I reached the back of the head.  Once I reached the end of the hair, I used a clear elastic to tie the end.

At this point the braid was hanging so I used a few hairpins that match Erin’s hair color and pinned the braid into the other side of the braid to make the crown.

I then took my fingers and pulled apart the braid to make it as textured and messy as I wanted.  I used hairpins to secure any loose parts around the braid.  I also pulled out some pieces to frame the face.

To give it extra texture and hold, I sprayed a bit of Oribe Dry Texturizing Spay.”

What do you think of this style on Erin?