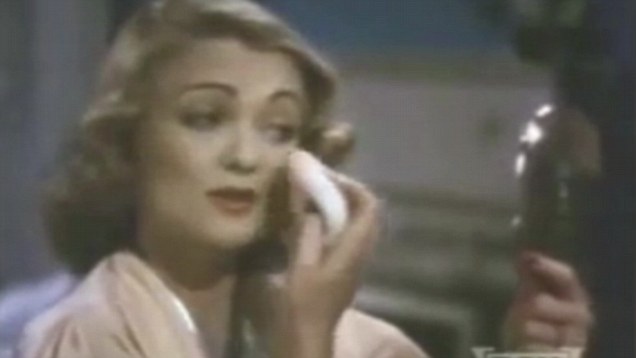 I need to interrupt your post-holiday/return-to-work madness to discuss Constance Bennett. Who is she, you ask? She was an actress of the ’30s and played in silent films prior to that. Her most famous Hollywood hit was Topper, in which she starred opposite Cary Grant. Her real claim to fame in my book, however, is the fact that she walked us through her skin care and makeup routine in this special 1937 short film (a YouTube precursor, no?) in a MOST 2015 way. Behold:

Here are the steps, in case your attentions span is too 2015 for this five-minute flick. She starts with a cleansing cream —one specific to her skin type — to start off with a “clean” slate. The next step is a STIMULATING cream, which should only be left on for a few minutes to start the stimulation process. What even is this skin-care sorcery? I do not KNOW, but lest you worry, I will be getting my hands on some stimulant cream ASAP. This is followed by a complexion mask for deep circulation, to be left on for the duration of a bath, Constance’s morning ritual. The next step is application of a glow base so that makeup adheres. Cream rouge and powder are the next steps, the powder optional if you want a more matte finish. The final touch is lipstick. Using a lipstick that stays on one’s lips rather than what those lips touch is important.

Are you charmed as hell? I am. Tell me your thoughts about this in the comments.

2 Comments → Excuse Me, But Constance Bennett Is The Original Beauty YouTuber In The 1937