Official Mascara Correspondent Ashleigh Ciucci lengthens her lashes with Bobbi Brown Extreme Party Mascara. Did she want to leave early or keep it going? Find out. In her words: 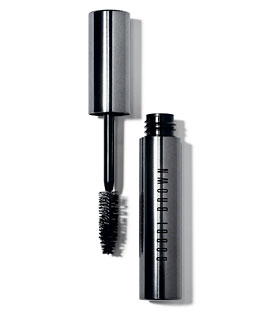 I don’t use a whole lot of Bobbi Brown products because my version of an extreme party would make the Bobbi Girl blush. Kidding (sort of.) But I kept my party mind open to try this mascara. With one coat, my lashes are soft, fluffy and tapered.  There’s a touch of curl and major separation.  The formula is almost gel like and it’s medium christmas-tree brush builds it up nicely.

The second coat doubled my lashes in size and the curl amped up a few notches.  There’s not a lot of density but my lashes looked super lush and rich. Bobbi calls this the first “touchup mascara” and she’s right.  My lashes still felt hydrated by midday and another coat really took my lashes to evening status.

Okay, okay, it made me wanna party! You won me over, Bobbi! But even a night of partying requires a clean face for bedtime; this mascara washed off easily with soap and water.  Buy it!