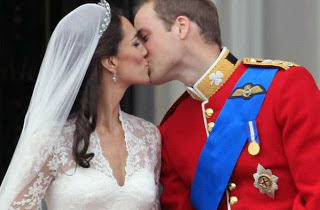 I have the opposite of Royal Fatigue. In fact, now that the pomp and pageantry are past, I’m going through withdrawal symptoms, fibrillating in limbo, while (whilst?) craving my royal fix. I don’t want to get back to my life yet. Totally taken with Kate and William, I still want to be in their milieu, a fly on the wall, say, at their cottage in North Wales and then on to the honeymoon, wherever and whenever it will be.

These are the impressions I’ll remember most: William working the crowd outside Clarence House, the day before, bending shyly to greet one and all and emanating the empathy and gentleness that recalled the best of his mother, Diana. Besides his obvious good looks, I love his natural sweetness and seemingly unspoiled personality. He never seems to take himself too seriously and has a delightful, self-deprecating sense of humor. Which brings me to Harry, that handsome, rakish red-haired hunk. Didn’t they look fabulous when they arrived together at Westminster Abbey, resplendent in their regalia? Harry, despite his bravery in the army including his tour of duty in Afghanistan seems to live for nothing more than prankish fun. When Kate walked down the aisle, Harry turned to look at her and then turned back to William to announce “she’s here” but what his gleeful eyes seemed to be saying was, “you can’t see her yet, but I can, ha, ha.” Another wonderful William moment – when he first laid eyes on Kate in her wedding dress, as she took her place beside him, he told her she looked beautiful and the expression on his face could not be faked. Priceless.

There was the excitement of Kate’s arrival, when she stepped out of the Queen’s Rolls Royce, her father at her side, the two of them carefully attending to the business at hand, the unfurling of the dress and train. At first I had a flash of disappointment, thinking that the dress (by Sarah Burton for Alexander McQueen ) didn’t quite live up to its hyped expectations, but it soon started to grow on me, moment by moment. Kate is a beautiful, understated girl and the gown is so her. It seemed to reveal its loveliness subtly, over time. The contrast of the long-sleeved lace overlay and the stiff, form-fitting silk gazar sweetheart bodice made it interesting. That, along with its simple silhouette, gave it a pleasing modernity. The veil was a killer. Shorter in front and trimmed in lace at its irregular hemline, it fluttered divinely in the breeze, forming a lovely cape-like effect across the bodice. The gown emphasized her perfectly proportioned waist and the degree of fullness in her skirt was just right. Her attenuated train, which formed a semi-circle as she stood to take her vows was another contemporary touch. Yet when she kneeled at the altar of Westminster Abbey, you felt the thrill of historical continuity, her dress suddenly seeming of a piece with the medieval décor all around her. Timeless.
Exiting the Cathedral, she was graceful and regal, William at her side, he, carefully and adorably intent on not treading upon her hem.

And now for some snapshots of the guests: Pippa Middleton, sister of the bride and maid of honor looked thrilled to be part of the proceedings in a to-die-for white, fitted column of a dress (also by Sarah Burton) with charming little cap sleeves that showed off her terrific figure. By the way, that girl really worked hard around her sister’s gown, no lie. She truly earned her keep as maid of honor. Carole Middleton, the very attractive mother of the bride arrived perfectly put together in an ensemble by Catherine Walker in the palest robin’s egg hue.

The Queen made her entrance looking very pretty and serene in a sunshine yellow outfit by Angela Kelly (hat to match, of course). The jewel neckline was sewn in radial tucks to suggest the rays of the sun, so fitting for a monarch!

Princess Michael of Kent, a legendary beauty, made a tasteful splash in luminous gray silk with a ravishing broad brimmed hat to match.

Prince Charles never looked better. He appeared undeniably distinguished and genuinely happy.
David Beckham reminded me, in a way, of a latter-day Fred Astaire. Dashing, handsome and impeccably dressed for the occasion, he projected that je ne sais quoi of the superstar and the sartorial genius that he is. I’m guessing it was his cravat. A pale gray, it was cunningly tied and worn with a shirt collar that was subtly edgy in its proportions. Spot on and totally of the moment.

All the hats by Phillip Treacy were memorable. Victoria Beckham’s little black fancifully-wired number was a savvy counterpoint to the rather severe dress she wore. Another woman, attired entirely in LED blue, sported a tiny Treacy gondola on her head, cocked at a fetching angle.

And then there were Beatrice and Eugenie to provide some comic relief. The Tweedledum and Tweedledee daughters of Prince Andrew and the absent Fergie, seemed dressed as outrageously as possible– revenge, perhaps, for excluding their mother. Seated behind the Queen (!) their uproarious getups were a hoot; I’m thinking particularly of that beige curlicued Treacy edifice that perched squarely atop one of their heads.

There were so many unforgettable moments. This wedding, and the lead-up to it, was a feast in countless ways. It will be missed, but then, again, we always have Harry’s betrothal to look forward to!