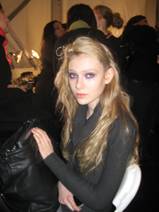 Lisa Butler for MAC drew mainly from a purple palette. She started with a black pencil liner (MAC Grease Paint Stick – it’s movable and then sets) on the top and bottom lid and dotted it between the lashes for depth before pressing on MAC Eye Shadow in Violet Trance, an electric blue/purple, on top of the pencil. Violet Pigment was dusted underneath the eyes. MAC Eye Shadow in Young Pink was also brushed onto the lids, which provided a soft black effect “for structure on the socket,” Lisa said. She then feathered out the shadow to soften the look. Skin and lips were left as-is. Brows were groomed, but were neutral.