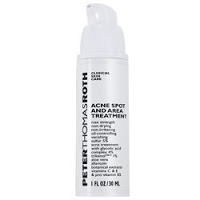 Acne is such a BITCH, isn’t it? I don’t know if it was the DC water this weekend, the trains and automobiles I was on or WHAT, but I woke up on Saturday with a nasty under-the-skin Proactive-Solution-commercial-cystic acne-style-zit (just one) on my right jaw area. In what the Beauty Addict calls the “phone zone,” except I hold the phone to my left ear so it’s not from that. It was vile. I named it Subprime Sally, in honor of the mortgage market crisis. Isn’t that cute? I did all the usual things to coax Subprime Sally into gracefully exiting stage left. I used my tried-and-true combo of Dermalogica Medibac Clearing Skin Wash and my trusty Zeno. They improved the situ marginally, but not enough for me. This was a Def Con 5 zit, evidently. Four days later, Sally was STILL there, nearly as large as she’d been on Saturday. 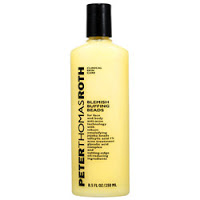 I decided to break out the big guns and give my new Peter Thomas Roth prods a go. PTR’s Blemish Buffing Beads for Face and Body ($36) combined with his Acne Spot and Area Treatment ($32) (left on overnight) lured Subprime Sally straight out the door. After three washings with the buffing beads and two nights with the treatment, her appearance has been reduced by 85%. I’m VERY impressed, friends. Both products worked to unclog my pores quickly without over-drying my skin.

BT dubs, are you loving VH1’s I Love The New Millennium as much as I am? I’m planning to rush home post-dins with my friend Stacey to catch 2004 & 2005, airing tonight. On one hand, I’m kind of annoyed that they’re airing these before this decade is over… I mean, I totally planned to be famous enough to be on their panel of commenters by the 2010s (sometimes I take a day trip to Planet Delush). On the other hand, I’m lurving every single SECOND of it. My favorite part? When Michael Ian Black (formerly of The State fame, the best show other than My So-Called Life to emerge from the 90s) remarks that he loves the color-coded terrorism threat advisory scale because it lets him know BEFOREHAND just how terrified to be. Classic.

11 Comments → The Story of Subprime Sally