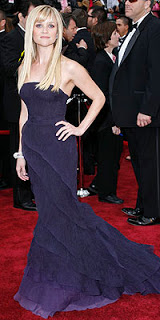 Reese by FAR looked the best. She rocks the Nina Ricci like no one else can. If divorcing the sexy as heck Ryan Phillippe leaves you looking like THAT, then I’d divorce him any day. Done. Her hair is simple, but fabulous and nowhere near as wispy/fine as it looked at the Golden Globes (although I loved her yellow dress/red dontcha heels combo she wore there).

Ellen is doing SUCH a fantastic job as host.

Abigail Breslin’s dress is so appropriate and adorable.

Jada Pinkett Smith is rocking the hell of her yellow dress.

What color is Gwyneth wearing? It’s GORGE. But she must be so pissed that she isn’t the only one rocking the Malibu Barbie hair.

Cameron, babe. Enough with the white dresses. The wedding with Justin isn’t going to happen, no matter how “ready” you appear to be. Cam’s hair, however, was 100% fab. Am so glad to see Heather and Jessica feel much the same way (except they don’t like her hair).

Where can I buy the ABS knockoff of Helen Mirren’s dress? I need it immediately if not sooner.

I obv love Naomi Watts’ yellow dress, but I don’t understand the sleeve things. At all. Hair and makeup is flawless.

Jennifer Lopez looks fantastic and she can sometimes be hit or miss. Her hair is not too “lady who lunches”, of which I approve. But how PG is she. Is this confirmed and I’m simply out of the loop or what? Because that’s a maternity dress, that’s not just an empire waistline. 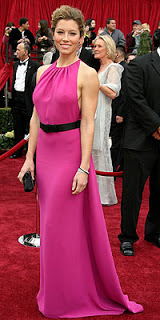 Jessica Biel looks most phenom in that Oscar de la Renta. I haven’t even confirmed/fact checked that it is indeed Oscar, but no one else designs a pink dress of that caliber the way he does. She is wearing that dress and not letting it wear her. 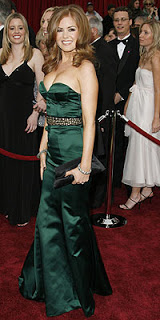 Isla Fischer, fiancee to the second hottie on my celeb crush list (Sascha Baron Cohen)looks amazing as per ush, but I think her cleave is treading the line between trashy and sexy. And yet–green is clearly her best color.

I cried a little baby bit during Jennifer Hudson’s speech. She looks amazing, save for that hideous small jacket on top of the dress she so thankfully LOST before “thanking the academy”. I haven’t even seen Dreamgirls yet(I KNOW, I’ve been out of the country/taking current events tests/working 14 hour days), but somehow I KNOW that that Oscar was meant for her. 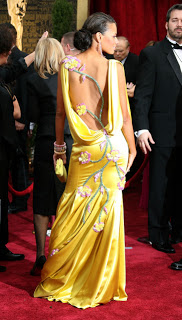 What on earth is THIS? From the front, it looks divine. Who appreciates a sultry yellow dress more than I? NO ONE. And then, Keisha Whitaker turns around and THAT happens. Just an FYI, I labled this photo “Yellow Hideous Mess” in my “My Pictures” file. Okay?

Marky Mark looks hotter than hot. I would die to be the seat-filler when his wife has to use the facilities.