Anyway, that’s what’s happening in my lifestyle. Work is going okay as my responsibilities have changed and are more in line with my skills and interests. Yay for that. Unfortunately, several other areas are not going so well. My friend J’s dad was in the ICU last week for pneumonia that evolved into a blood infection. How awful is that? My cat Ramon has become increasingly sick and is in a lot of pain. The vet said that he has hyperthyroidism and will need to undergo radioactive iodine therapy, which costs $1500 I don’t have. This in addition to the $350 I racked up in vet bills last week. Now, I was planning on using my bonus to pay for it, however, my employer announced today that due to market conditions, bonuses won’t be given out this year. This is wildly convenient, right? So, though I think it’s incredibly tacky to have blog tip jars, for the moment, it’s the only way I can think of to try and diminish the loan I’m going to have to take out for him to have this procedure as it’s necessary and I plum can’t afford it. It’s the donate button on the right side of the page underneath the google box (through paypal). If you can contribute a couple dollars, Ramon and I VERY much appreciate it! It’s part of my several step plan to earn slash save money. The plan involves pursuing freelance work, eating soup, and eschewing social activities (non-free ones) until 2008.

So my Beauty on a Serious Budget campaign has started. I attended a black tie event on Saturday, to which I rocked a mani/pedi performed by moi in addition to a bikini wax also performed by moi. I frequently do my own manis in front of the TV, but it’s definitely something that gets easier with practice. I used Sonia Kashuk Nail Polish in Cool Bordeaux. I also painted some over my existing (but in des need of a touch up) pedi and without looking very closely, it looks like a fresh pedi. Clip nails first lest you be plagued with brontosaurus toe. 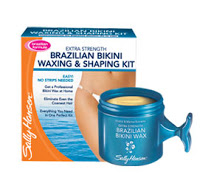 The real budget gem is Sally Hansen Brazilian Extra Strength Wax for only $10.99 for a jar that should last 2-3 uses. I’ve used other versions of Sally Hansen wax and wasn’t so impressed. This one is smart enough to grip hair, not skin. Microwave for about 10-20 seconds and wax off, like Mr. Miyagi. Lasts about 3-4 weeks and is far easier on your wallet than a wax at a salon which can range from $30-$100. If you are in the market for a salon wax in NYC on the cheap, I highly recommend my gal Julia at Davidov Salon on 2nd Avenue at 36th Street. She does a fab job and it costs about $31.

I’ll be back this week for some PR freebie reviews. Stay tuned!

8 Comments → Beauty on a SERIOUS Budget