I’ve always thought of Nora Ephron as one of my mentors, though we’d never met.

One could argue that writers write because that’s who they are (and I do agree) but one of the major influences of my becoming one was one Ms. Nora Ephron. As Slate’s Emily Yoffe wisely pointed out, she’d mastered “the art of writing sentences that could come from only one person.” She wrote the way she talked and it seemed utterly natural, yet incredibly articulate and more important–TRUE. 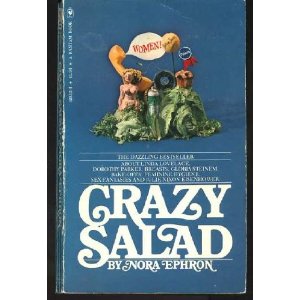 In the late ’80s, I was used to having to entertain myself. My brother was five years older and was busy with his friends; my mother has Chronic Fatigue Syndrome so I read A LOT. I had friends, too, but my childhood was spent largely by myself. This was not a problem for me, I’ve long been a person who operates best this way. One of my favorite activities was looking through my parents’ vast bookshelf, and when I was about 8 or 9, I decided to read Nora Ephron’s “Crazy Salad,” because it had a picture of a mermaid on it. I was totally too young to be reading that book, but no one knew what I was up to, and it was from Nora that I learned everything there is to know about breasts, among other things. Nora was actually the wise (much older) sister I never had.

When my mother told me a few years later that she’d written her revenge novel “Heartburn” about her cheating husband Carl Bernstein (he of that little scandal you may know about called Watergate), I knew I HAD to be a writer. I was in awe. I thought: Can you imagine? I’m not violent and I’m not manipulative. But undergoing such a trauma inflicted by someone who (supposedly) loves you and being able to have the last word–without anyone being able to take that away from you–sounded like the very best skill to have in the world.

And THEN I saw “When Harry Met Sally,” one of my all-time favorite movies. I’ve LIVED that movie and have had relationships like the eponymous characters more times than I’d like to even discuss. I watch it at least twice a year. “Is one of us supposed to be a DOG in this scenario?” is one of my favorite lines ever. As is this one from Nora’s “I Feel Bad About My Neck” after explaining she’s ready to see an old friend because she’s thin now: “Now I weigh 126, the exact amount I weighed when I came home from college having become a butterball. I can’t explain this.” I think that phrase to myself every time I step on a scale. What is that?  There are so many Ephrases (Ephron phrases) that pop into my head on a daily basis.

RIP, Nora Ephron. Here’s to having the last word. I just wish it didn’t have to happen so soon.