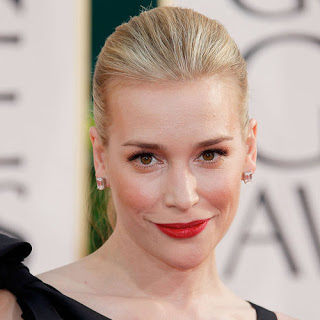 Piper Perabo has long been a BBJ fave since she starred in our favorite guilty pleasure movies Coyote Ugly. Her hair in the flick was simply the stuff of dreams. Piper rocked a gorge makeup concept on the red carpet at the 2011 Golden Globes last night, courtesy of celebrity makeup artist Troy Surratt. In Troy’s words:

The inspiration for the look was a modern take on classic hollywood; long lashes and luscious red lips. I created a smooth canvas on her skin with COVERGIRL Simply Ageless Foundation and warmed her up with some bronzer and light pink powder blush. On her eyes I used the lighter color of COVERGIRL Smoky ShadowBlast in Bronze Fire on the lid and set it with a powder eyeshadow. I finished the eyes by creating long lashes with COVERGIRL LashBlast Length. To create her luscious red lips I first applied COVERGIRL Outlast Lipstain in Scarlet Pucker so the color would last all night and topped it with COVERGIRL Lip Perfection in Hot for extra glamour.

Hot, and love the ponytail! What say you about Piper’s look?