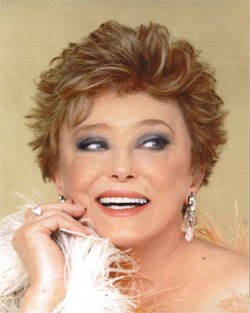 I’ll carry my favorite Blanche Deveraux style Estee Lauder alligator compact in her honor and will be sure to invest in a myriad of swingly silky robes in her memory. That woman made me want to be southern. The irony is that today, of all days, I was invited on a press trip to Miami (it’s nice, so I’ll say it thrice!) in July and I was JUST planning on telling all you gals by enumerating the city’s virtues–starting with the fact that you can “lanai” (I’m using it as a verb) any day of the year.

Oh BLANCHE! We’ll miss you! Who else could deliver this line?  [Blanche explaining why she worn red at her wedding instead of white] “Oh please, it’s bad enough hearing all those snickers as you walk down the aisle, but me in white, even I couldn’t keep a straight face.” Someone on Twitter pointed out that Blanche was the original Samantha. I couldn’t have said it better myself.

Somewhere, a group of gays are crying. Hope you’re having a late night cheesecake in the sky with Bea and Estelle, Rue.