I saw Star Trek twice this weekend. I know. Are you even surprised? Sci fi, JJ Abrams’ magic, the hotness that is Chris Pine. Two mage things about the movie:

1. This movie is the reason LOST is not as good this season as JJ Abrams and Damon Lindelof (and probably other LOST notables) have clearly been focusing all their energy on Star Trek. I seriously thought the movie could not have been better.

2. The cat-eye liner on all the Starfleet women is TO DIE. It manages to be, all at once futuristic AND retro ’60s. Naturally, I died a million deaths that one of my questions to Mindy Hall WASN’T about the liner. Thanks to DVR (such a blessing and a curse!), I’d missed all Star Trek promotion, and therefore didn’t even KNOW about the liner until Miss Zoe Saldana arrived onscreen in the movie and I actually GASPED.

So, obv, I emailed Mindy immed and asked her for the 411 on that liner. She has so generously (and quickly!) responded to my question and provided a detailed explanation below. Check it:

“The look for the Enterprise crew was ’60’s-inspired, futurist thinking eyeliner with a twist. This makeup is all about the eyes and the eye liner was the trend or custom in this galaxy and star date. [Ed. note: I love that Mindy dropped “star date.” Sci fi lingo is totes fun.] Star Trek Eye Liner was the focal point of the makeup design… and no two were alike. We went for individuality in all groups of our futuristic world. 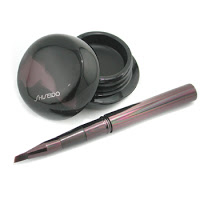 Shiseido The Makeup Accentuating Creme Eyeliner in Deep Black ($26) is the rock of this look and we used it on everyone. Yes, also on Zoe Saldana. This product is waterproof and smudge-proof but easy to paint with, as it is a cream, yet as it dries it “sets” to a long-wearing formula. Black mascara, MAC strip eyelashes, and beautiful brows complete this look. The tools for this eye concept would accompany me on my desert island. [Ed. note: You know, the quintessential game, “What three makeup items would you bring with you to a desert island?]

Our research was focused on fashion, past and current, art and 1960’s science fiction movies. Terry Baliel, Department Head of Hair, and I collaborated on the design with Michael Kaplan (the costume designer). We used models to show the our concepts and completed looks to JJ Abrams. We screen-tested every look once we had concept approval.

Books were put together for our staff with the looks that we created along with pictures and strict instructions. My team of artists for the Enterprise was headed up by Marianna Elias, as well as Rebecca Alling and Bonita DeHaven assisting in maintaining the look and answering the makeup crew’s questions about the design.

It was a learning curve for the artists, as they were to be creative but had restrictions. Each member of the makeup crew for the Enterprise had a beauty makeup background and could paint! That lined eye was “no joke” and the artist needed to have the ability to adjust for each face and paint a beautifully different line that was inspired.

The design integrity was very important at all times in this film, so all makeup and hair was checked before going to set. Marianna and Rebecca would “walk the line” with me to approve and correct if needed for each cast member’s makeup.”

Love it! Thanks, Mindy! And stay tuned for more pro tips and set secrets from her.