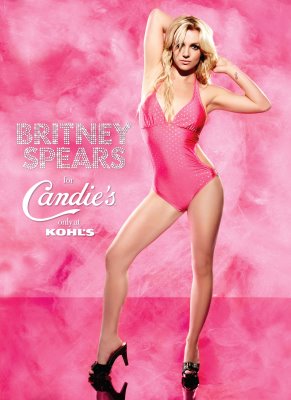 Ah, all is right with the world: Britney Spears is culturally relevant again with her hit album Circus and as the new face of Candie’s (sold exclusively at Kohl’s) new ad campaign.

In a first for the brand, the Britney Spears ad will be featured exclusively in one publication. A full sized, limited edition, pull-out poster will appear exclusively in the April 15th issue of Us Weekly.

The ad features a “Britney Spears for Candie’s Only at Kohl’s” logo in diamonds with a collage of color and black and white snapshots of Spears from the photo shoot. Brit is featured in Candie’s apparel, footwear, swimwear, intimates and accessories available exclusively at Kohl’s. The campaign was shot by Mark Liddell in Los Angeles.