Ktchn Apothecary founder Kevin Lesser is so much MORER, friends. I found that out when I met him a few weeks ago to learn more about his product—which I advise you to get into— and we discovered we have a mutual love of all things Back To The Future and also Clueless. Kevin’s canon is ROBUST, y’all. Back to Ktchn Apothecary: It’s the first DIY skincare company that delivers everything you need to make more naturally powerful skincare fresh at home, in less than 10 minutes. Think Blue Apron for sulfate-, phfalate-, and everything bad-free skin care that makes your skin feel super soft and hydrated. Prior to founding Ktchn Apothecary, Kevin oversaw engagement marketing strategy on major brands like Jim Beam, Sauza, Effen, and Courvoisier. Since passing the Courvoisier, Kevin lives in Manhattan with his five year-old cocker spaniel poodle, George (pictured with him, below). He is full of fun facts and interesting tidbits, so I tapped him to share his Five Rules For Life. Here they are, in his words. 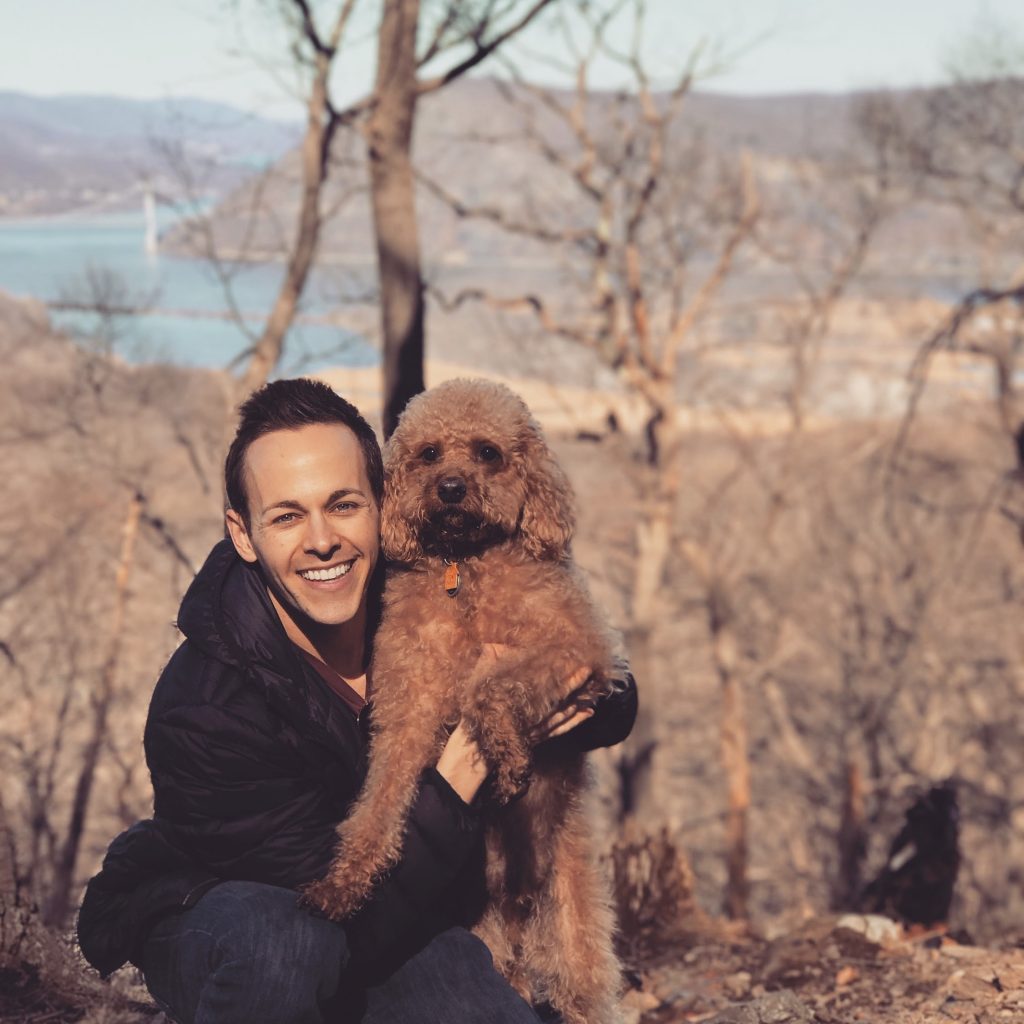 Be honest, direct, and authentic. For me, honesty is truly the best policy. I’ve found that if I don’t say exactly what’s on my mind, all other thoughts screech to a halt, and I somehow feel that  by not saying what I’m thinking, I’m being dishonest. So I just say what I’m thinking and pull back the veil as to why I’m thinking it. I’m not sure if this is a great quality or a terrible one. People tell me that they always know what I’m thinking and where they stand with me and I really like that. I don’t want anyone wasting any energy wondering. It’s amazing how much time you free up for yourself and others when you cut to the chase. Sure, sometimes the truth can be uncomfortable, but not addressing the truth doesn’t make it any less real. Being honest, direct, and authentic helps everyone worry less and have a lot more fun in the long run.

Be appreciative. My mother used to tell me that “no man is an island.” This stuck with me and I’ve always found it to be true. I’m an extrovert by definition of the word. I draw my energy and excitement from those around me. Because of others, I see different perspectives and gain insights I might not otherwise have. And I’m truly grateful for that. So I like to regularly let people know what their presence means to me.

If you really want to understand other people, get to know yourself first. In everything from marketing to personal relationships, I have seen both the successes that can be realized or the failures that can come due to the absence of self-awareness. Digging deep to find out who you truly are, what you really want, and the authentic reasons why you do what you do or say what you say is incredibly important. Not knowing these truths creates a haze that can’t be seen through and a boundary that blocks connection. When I actively work daily to understand these truths about myself, the fog clears and boundaries crumble.

Have the curiosity and confidence to question everything. Ever since I was a child, I’ve always wanted to understand what makes things tick, from people to electronics. So I ask questions. Lots of them. And I’ve realized that the more you ask, the more you listen, and the more you see for yourself, the more you learn. And I love learning. I have an insatiable curiosity and am driven by discovery. However I’ve also learned that sometimes when you ask “why,” you can occasionally strike a nerve or hit a wall with some people. Someone might not know the answer to your question or in turn question it themselves — which may make them feel defensive or uncomfortable. So they can lash out. This can make it intimidating to ask questions — status quo is comfortable, after all. But to me, comfort isn’t a good enough reason for things to remain the same. I’ve found that questioning is where change and progress reside. That’s pretty much the story behind Ktchn Apothecary. I wondered why my moisturizer was watered down and loaded with harsh, unpronounceable chemicals, and why it  rarely did what it  promised it would do. So I went on the hunt for answers and I found puffery. A world of status quo that wasn’t being questioned. I wasn’t satisfied with the answer, so I built my own solution.

When you’re scared of something, run toward it faster. I used to think that fear was your mind’s warning signal telling you catastrophe was imminent. Then I realized that fear more closely resembles the smoke alarm in your house. Sure, that beeping could mean there’s a fire, so you should take a peek and see why the alarm was triggered. But chances are, as with most smoke alarms it’s a false alert. I’ve found that most fear isn’t self-preservation but rather self-doubt and avoidance masquerading as fear. So now, when something gives me a pang of fear (whether it’s joining a flag football league, taking a boxing class, or launching a new business), I pull back the curtain and ask why I’m feeling that way. When I undoubtedly find out that my fear was a false alarm, I give myself the “all clear” and run faster toward whatever it was I was afraid of (before the fear has a chance to kick back in). I’m only human, after all.

Bonus Rule: Adopt a dog. They exemplify all of the most important rules for life and are a daily reminder of what matters most. Plus, nothings says “I’m home!” like being met at the door by a wagging tail and a little furry face.