Celebrity makeup artist Georgie Eisdell created this luminous makeup effect for Bryce Dallas Howard for the premiere of “Dinotrux” on Wednesday, August 12th in Hollywood. “For Bryce’s look for the premiere of Dinotrux, we wanted it to be clean and summery so my focus was on a nice bright lip.” Here, Georgie shares the beauty breakdown. 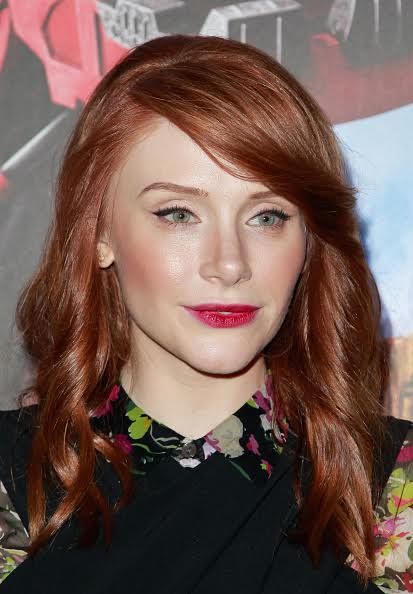 “First, I prepped Bryce’s skin with La Mer Moisturizing Lotion. Then, I evened out her skin tone with Bobbi Brown Skin Serum Foundation in Sand. To take the edge off the shine, I used La Mer’s The Powder.

To shape and extend her brows, I used an angled brush and Laura Mercier’s Brow Duo in Auburn. For the eyes, I brushed Bobbi Brown Eyeshadow in Bone on her eyelids, all the way up to even out the lid. I used the Tom Ford Eye Definer Pen in Black on the upper lash line, going very tightly from the inner corner of her eye to the outer corner with a fine flick at the end for a feline eye, and to open up her eyes even more.  On the top lashes only, I used two layers of YSL Waterproof Faux Cils mascara in Black.

I added a little color and contour to her face using Tom Ford’s Bronzing Powder in Terra.  I placed it on the temples, jaw line and cheek bones, and also in the creases of her eye for depth.

I then used NARS Blush in Madly, and then in Outlaw for a pop of color to the apple of the cheek.  Afterward, I added a little Charlotte Tilbury Film Star Bronze & Glow in Light to Medium to her cheek bones.

To finish off her look, I used Josie Maran’s Coconut Watercolor Lip Stain in Berry Bliss.”

What do you think of this look on Bryce Dallas Howard?