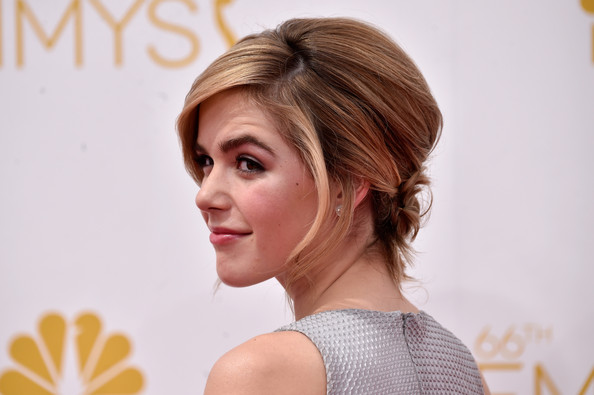 Kiernan Shipka’s hair AND dress were one of my favorite looks of the night. Her beauty game was KILLER at the Emmys! Celebrity hairstylist Bridget Brager for Garnier created this look. It’s a little ’60s, a deserved nod to her Mad Men character, but in the most modern way possible. Here, the beatuy breakdown.

First, Brager applied Garnier’s Marvelous Oil Deep Nourish to smooth Shipka’s hair and then blew it out straight. Next, she applied a quick shot of Garnier’s Sleek & Shine Anti-Humidity Aerosol Hair Spray and set Shipka’s crown section of hair with a two-inch curling iron. She let the curls cool on large Velcro rollers and then curled her remaining hair and let fall.

Finally, Brager sprayed Garnier’s  De-Constructed Texture Tease throughout the back of Shipka’s hair and then gathered below the nape of her neck. Next, she created tiny little knots which she pinned into place. Brager finished by setting the look with Garnier’s Sleek & Shine Anti-Humidity Aerosol Hair Spray.

Were you a fan of Kiernan Shipka’s Emmys look?