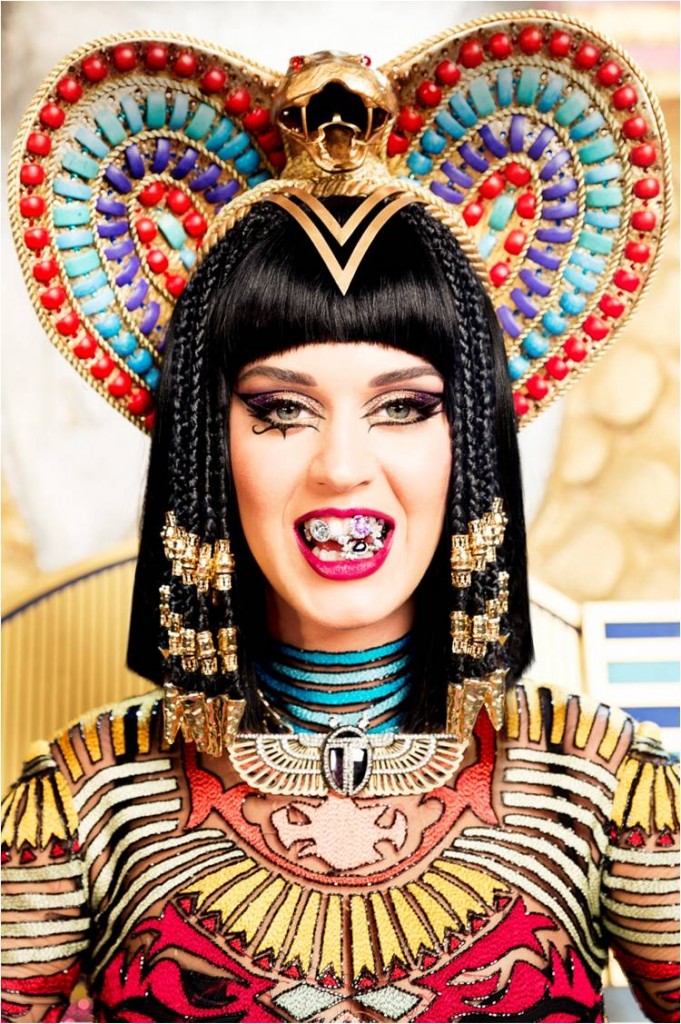 A little casual Cleopatra Friday never hurt anyone, right? Here, I scored the details on Katy Perry’s “Dark Horse” Video Look by Jake Bailey using CoverGirl. Says Jake, “The central element to this look is definitely the intricate liner. This eye makeup is based on the ‘Egyptian Eye’ also known as the ‘Eye of Horus,’  which is an ancient Egyptian symbol of protection, royal power and good health.  An appropriate look for Katy’s regal character in this video!” Here’s how Jake got the look.

“To create this look I used COVERGIRL Bombshell Intensity Liner in Pitch Black Passion #800 to draw the intricate design around her eyes. It was an adaptation of several references that I found online, but I liked this one the best. It was important that I use a long lasting liner as it was a long day under hot lights and I needed it to stay in place.  Once the liner was complete I added some sparkle with the Bombshell Shine Shadows. I used the Shine Shadow in Gold Goddess on the center and inner area of her lids and Ooh La Lilac on the outer corners. Before the Shine Shadow dried completely I tapped a bright purple glitter on top of the Ooh la lilac and a peach glitter on top of the Gold Goddess areas. I finished the look with a strip of false lashes and two coats of Bombshell Volume Mascara. The first coat is a rich volumizing formula that works Katy’s own lashes into the false pair and adds extreme volume. The second end was used to add depth with a wet looking “lacquer” finish.

When doing an intricate eye look, especially one with glitter, I always do the eyes first. There’s no point in trying to achieve a flawless complexion, cheek and lip if you’re going to be dropping shadow and glitter all over it! Once the eyes were finished I buffed a thin layer of COVERGIRL Outlast 3-in-1 Foundation all over her skin and neck using a flat tipped Kabuki brush to buff it out thinly and evenly. I then mixed a touch of Shine Shadow in Golden Goddess with an apricot cream blush on the back of my hand and blended it onto her cheeks and cheekbones for warmth and glow.

The look was finished with a bold blackberry lipstick called Euphoria by COVERGIRL LipPerfection. It’s one of Katy’s favorite colors!”