posted in He's Just Not That Into You, Highlights, Hiro Haraguchi on February 9, 2009 by amberkatz
SHARE
Tweet 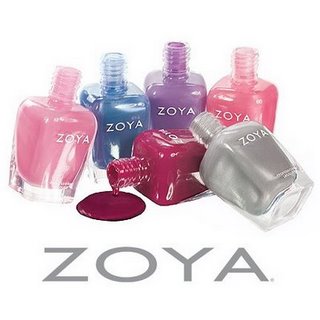 Just how much mileage can I get out of He’s Just Not That Into You jokes ? I guess only time will tell. (The title is a line from the movie. It’ll be the new “You had me at hello.”)

Speaking of the movie, I saw it on Friday night with my roommate and I am convinced that the best character in it is totes trage Gigi’s (played by Ginnifer Goodwin) GORGEOUS PURPLE NAILS. Seriously. The movie was packed. I mean, I did see a movie about dudes not being into girls in MANHATTAN, where the line stretched around the block of single girls. It was a microcosmic example of the social experiment that is the NYC dating scene. So anywho, Carrie and I got a seat in the nausea-inducing second row. The bad news: I could pretty much see up Kevin Connolly‘s nose. The good news: I got to see Ginnifer’s nails up close and personal. And I feel promptly and deeply in LURVE. To the point where I rushed home and gave myself a mani at midnight with my Zoya Malia (pictured third from the left, above $6), a TO DIE violet cream from their Spring 2009 Twist collection. Both Dina and Charu complimented the heck out of it at brunch yesterday.

Also this weekend, I refreshed my H ‘lights at Hiro Haraguchi with the fabulous Jane, with whom I’m in a totes monag relashe. Seriously. She’s the best. If you need highlights in NYC, she’s absolutely fantastic. Post H ‘lights and gloss, I scheduled a blow-out with Kristyn, who is such a gem. It was she who introduced me to Moroccanoil, and you KNOW how deep that love affair runs. Like Grace says about Jews’ love for chicken on Will & Grace, “it’s deep and it’s real.”

Click here to read more about my thoughts on Hiro Haraguchi.