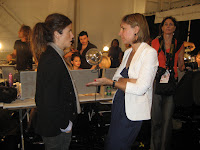 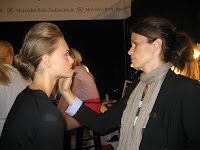 Okay, so I’ll just SAY it. TIBI is my fave show on which to report at NYFW. For your ref, here’s last season’s post. This time, I was ESPECIALLY enthused to interview the famed Gucci Westman (pictured, left). Last season, I interviewed her at Miss Sixty, which I also reported on today (stay tuned for a post on that.)

The inspiration: Hong Kong. Amy Smilovic lived there for a spell during the late 90s when her husband was offered a job there. The look was an Asian tomato-red-stained lip and pink cheeks. For lips specifically, Gucci created a spring red infused with a hint of coral. I was so over my spring/summer clothes until I heard the words “spring red.” I feel like I need to wear something in spring red IMMED if not sooner. Anyway, to do this, she combined two shades of lipstick: Revlon Super Lustrous Lipstick in Fire & Ice and Kiss me Coral. The former was applied with her fingertips like a stain, while the second was dabbed on afterward. The eyes were toned down with a sheer wash of dove grey shadow. She used Revlon Illuminance Creme Shadow in Twilight and Not Just Nudes to achieve a minimal eye with a bit of depth. Gucci finished the look with Revlon 3D Extreme Mascara in Black on the top and bottom lashes to infuse a bit of drama. Revlon Cream Blush in Berry Flirtatious and First Blush was applied with the goal of conveying flirtation on the cheekbone and drawn out to the eye area. Skin was kept even and smooth; Gucci simply matched the models’ skin tones. This was my fave makeup look yet. Check it: 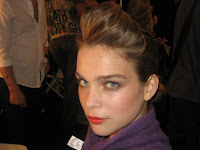 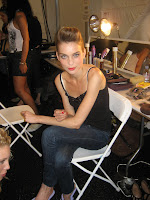 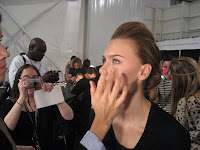 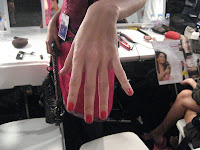 Wanda of Creative Nail Design gave me the deets on the gorgeous tomato-red nails I need in my lifestyle immediately if not sooner. The color is CND’s Wild Fire, a beautiful red/coral applied to tailored, squoval-shaped nails. 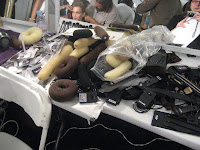 Then, I headed over to my FAVE stylist of Fashion Week, the hilar Kevin Ryan (who also did hair at TIBI last season.) The inspiration as only Kevin could come up with it: “Japanese Street Kid meets Polygamist Bride.” I can’t EVEN. The pompadour WAS very Nikki from Big Love. He used a kit he’s creating to be sold at Ricky’s under his label, a collaboration with another fab stylist named Frank Rizzieri called R Session Tools, which sounds, in a word, phenom. It includes sponges for creating your own fat bun, which is what he used for the models backstage. It’s a foam doughnut of sorts, and includes a small brush to use for backcombing, a lot of which was done at TIBI. The front of the hair boasted a mini pompadour, very James Dean, which Kevin secured with his R Session bobby pins. The crown was only slightly amped up with minimal volume, mostly achieved with Bumble and bumble Thickening Spray. A few trysts with a curling iron created a bend in the front of the pompadour. “Very far East,” Kevin said. “Does this look nod to any decades past?” I asked Kevin in earnest. “Not this time,” he replied. “Solely keeping a look within a decade can limit you. I work within my own space/time continuum.” He brought sci fi (which you know I adore) to the Fashion Week party. And that, friends, is why he’s my fave FW stylist. 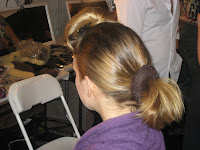 Model having her hair done – notice the doughnut. 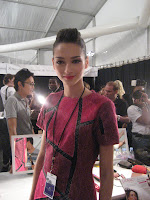 The finished product; dressed to tear up the runway!

P.S. Kevin introduced us to Ricky, who was hanging out backstage at TIBI. Yes, THAT Ricky. He was a delight to talk to and shared a bit of his story with me which started out working at his dad’s beauty supply shop called Love Stores and evolved into an eight-page spread in one of Allure‘s first issues. Such a doll.