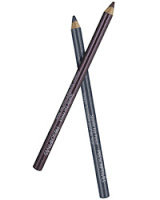 I have nearly used up my Prescriptives Sparkle Eye Pencil in Plum Sparks from their Fall 2008 Daring Collection, and was deeply excited to try out their Midnight Sparks pencil ($17.50). I love a navy liner. I was kind of flummoxed when it arrived with not silver sparkles, as the plum sparks liner boasts, but GOLD. Gold and blue, to me, is reminiscent of my high school colors (go Trojans!). Fab for school spirit, but I wasn’t so sure how it would look on my lids. You know? Anyway, I tried it out and it’s absolutely GORGE. Not high school-spritesque at all. On lids, it provides definition seemingly garnered directly from a starry night. In fact, it reminds of that eponymous very popular former (like, ten years ago) Chanel nail polish color. Side story: Picture it: Blue Bell, PA, 1996: that polish was one of my first high-end beauty buys and I nearly assassinated my friend Angela when she spilled nearly half of it (by accident) while painting her nails at my house after school. I LURVED that stuff. Anywho, the pencil is absolutely divine and is limited edition, so get on it!

In other news, I’m in the Philly ‘burbs until Friday. Today, I hit up Marshalls (when you pay NYC rent, unfortunately, you’re limited to discount shopping) and they had THE BEST STUFF. I purchased:
a yellow long-sleeved Rebecca Beeson T-shirt
2 Laundry by Design Dresses (one navy, one grey)– as you know, that’s my new fave brand. They make dresses that are PERFECT for work, but also for my post-work lifestyle. Seriously, it’s so hard. The title of my memoir should be What Can I Wear to Work at my Business Casual Office that is Also Approp to Wear to Interview a Supermodel about her New Perfume?
a green short-sleeved Velvet T-shirt

Then, I enjoyed a delish lunch at with my mom and my friend Lee at Panera, which I only WISH we had in NYC. Later, I drove into Philly by myself, which I haven’t done since the year 2000 to meet Daneen for dinner. Given that I drive approximately 4 times a year, I was kind of nerv behind the wheel and definitely held up traffic when I had to sneak my way into the left lane to get on to Fairmount Avenue, which I nearly missed and people were HONKING at me. It was stressful, but Daneen and I had a fab time catching up over hummus and delish entrees at St. Stephen’s Green. We finally had to leave when the older gentleman seated behind me started sneezing wet-sounding, disgusting sneezes upwards of ten times… within the span of four minutes. Daneen hilariously remarked that she felt like she needed to put on a hazmat suit to protect herself from the germs.