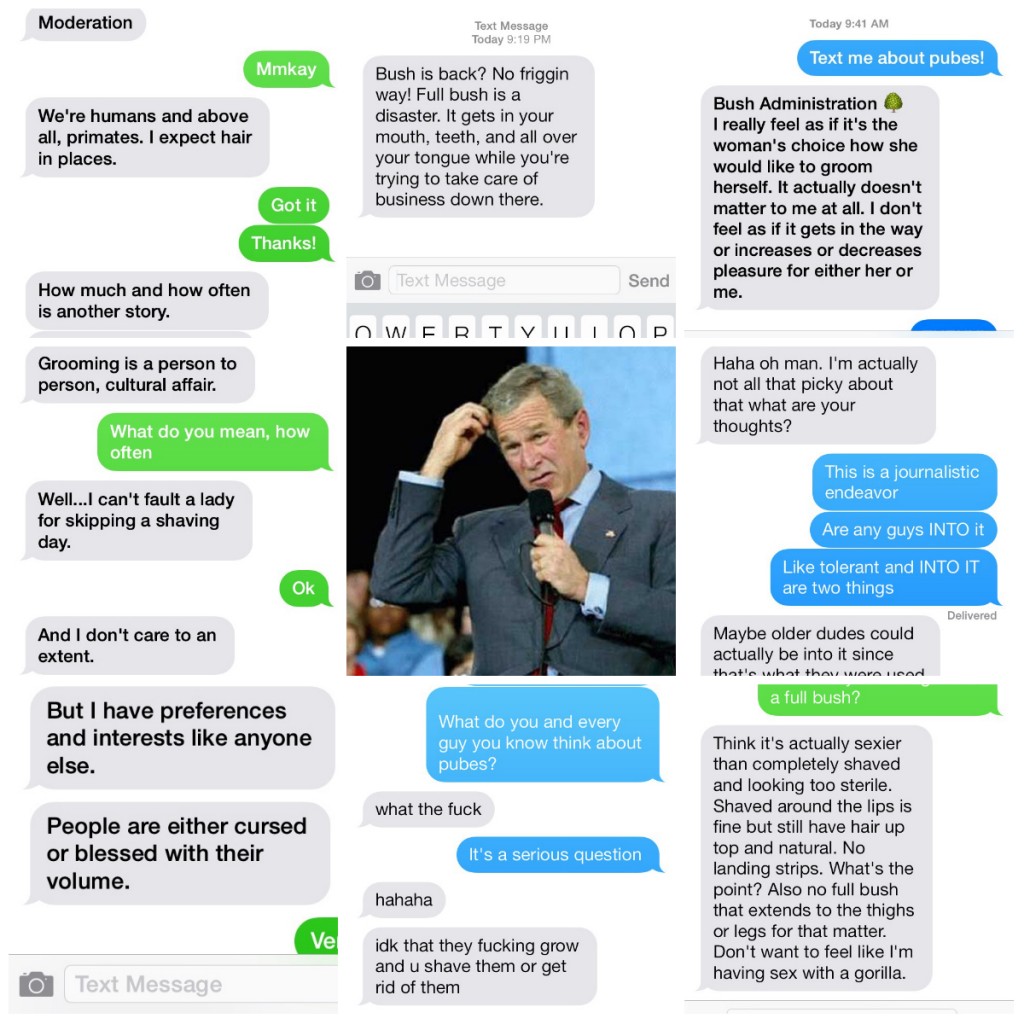 Listen, the buzz is bush, everyone. I wish we were talking about something else ad nauseum. Mostly because I’m prissy; and I know my extended family reads this blog regularly though I tell them not to because I want to be able to cover things like this and then not have to be asked about it at the Passover table after my cousin Justin asks the four questions. Also because I just underwent about nine sessions of bikini laser hair removal (with the amazing Jennifer Belser at Pulse Laser and Skincare Center, highly recommended) and at that exact moment when I could revel in my new, nearly hairless-as-Mr. Bigglesworth lifestyle, EVERYONE is parlez-ing pubes and how they’re IT for 2014.

No, everyone. Julia already penned a post about pub(l)ic opinion last month. There was Cameron Diaz. And Wolf of Wall Street‘s discussion of it being a fancy new thing during the inauguration of the wood-floor era. The Mindy Project’s Danny Castellano waxed poetic about his preference being a robust amount of hair. The mannequins at American Apparel are suddenly donning Boogie Nights-style bikini lines. Gaby Hoffman hasn’t been acquainted with a trimmer in about a year on Girls. Last week, bikini maintenance (or lackthereof) was the subject of the New York Times’ Skin Deep article’s focus. Hell, Scientific American’s even covered it.

So it’s been decided that it’s hot to have a bush. But who decided? Is this one of those for-girls trends at which guys blink blindly, like the capris, harem pants and Uggs of yore? Are they actually into this “going native” movement? Did we make all of this up because we’re tired and out of extra cash every month for this kind of painful ridiculosity we’ve been engaging in since the late ’90s, all triggered by porn stars? Now, I don’t advise cutting your hair (on your head) to please anyone but yourself. But I think we can all agree that bush administration is something that can have mutual consequences, so Julia and I texted about six straight dudes and two lesbians, ranging in age from 26 to 49 – some single, some in relationships and a couple who are married – in New York, Philadelphia and Boston, lest the overly manicured New York women skew the sample with their high-maintenance tendencies. Names have been eliminated to protect the innocent.

So as you see, in the text collage above, men remain, alas, a house pretty divided when it comes to the strictness of how hirsute we should be. But no one was actually INTO a ton of hair. Some were into none, some felt it was a woman’s choice and a tended-to tuft was OK. Now, I want to hear from you. What’s your stance on Decision 2014? (And what’s your beau’s?)