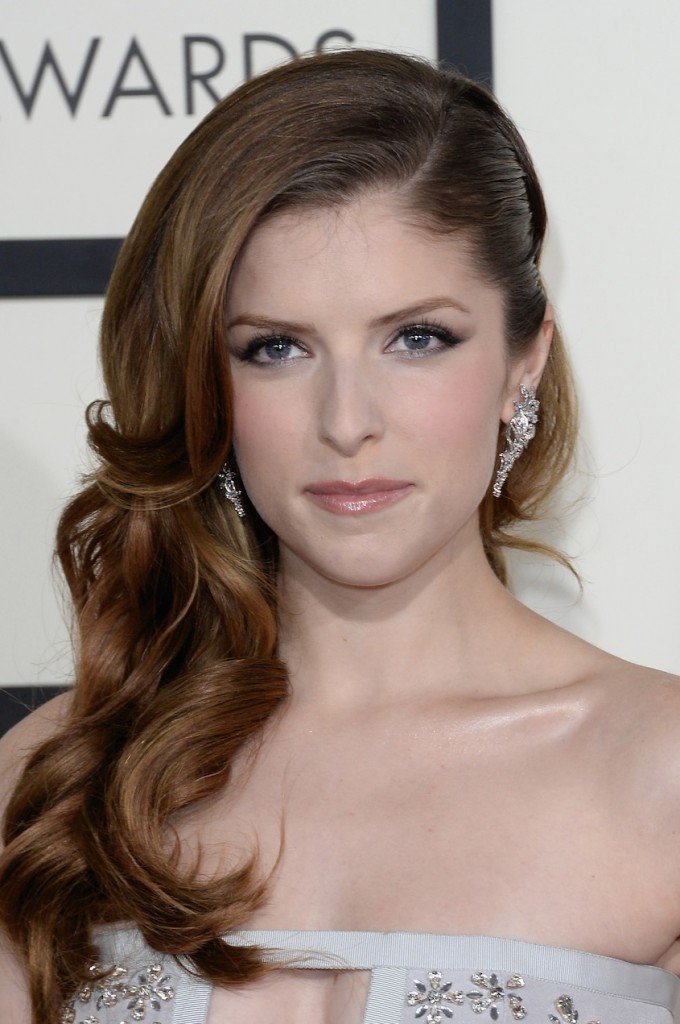 Craig Gangi created Anna Kendrick’s ‘do last night. “Anna wore a silver Azzaro dress that was sleek and structured. Therefore, I wanted to compliment the dress with a soft, Veronica Lake-inspired hairdo,” said celebrity hairstylist Craig Gangi for Garnier. “But because it was the Grammys, we gave it a slight edge, tightly pulling up the right side for a modern, sleek look.”

Since Kendrick’s hair is naturally very curly and voluminous, Gangi started by applying Garnier Fructis Style Curl Calm Down Anti-Frizz Cream to Anna’s wet hair to tame the volume and eliminate frizz. He then blow-dried her hair very smooth.

Next, Cangi lightly sprayed Kendrick’s hair with Garnier Fructis Style Sleek & Shine Blow Dry PerfectorStraightening Balm to protect from heat and add shine. Then, he thermal set her hair and after letting cool down, brushed it out and tightly pulled it back to one side.

Gangi then applied the tiniest drop of Garnier Fructis Style Sleek & Shine Sleek Finish 5-in-1 Serum Spray into his hands and smoothed over her hair for incredible shine. To complete the look, Garnier Fructis Style Extreme Control Anti-Humidity Hairspray was used to set the look and provide firm hold and repel moisture for a look that will last all-night.

My favorite Instagram pal, Vanessa Scali for Maybelline New York, created Anna’s makeup look and it is beautiful. To complement Kendrick’s stunning silver Azzaro dress and side-swept hair, Scali created a makeup look featuring smoky, sultry eyes and effortless skin.  She used cream shadows, which look very modern on the skin and have a slight transparency that adds shape and drama. Additionally, a sheer, vibrant color on the cheeks and a rose/nude lip complimented Kendrick’s eyes, without competing with them. “Anna’s smoky eyes gave her look a little edge. Keeping the rest of her face effortless made this a very pretty and wearable look.”

Foundation: To create Kendrick’s effortless skin, Scali began by applying Garnier Ultra-Lift Transformer Anti-Age Skin Corrector (Release Date: February 2014) mixed with Maybelline New York Fit Me Foundation to provide hydration and give the skin a soft, luminous glow. Scali swiped this combination along the bridge of Kendrick’s nose, cheeks, chin and forehead, using her fingers to blend the color to the outer edges of her face.

Concealer:  Scali used Maybelline New York Fit Me Concealer under Kendrick’s eyes and on the inner hollow of the nose, just beside the inner corner of her eyes.

What do you think of Anna Kendrick’s look last night? This beauty concept was one of my favorites.