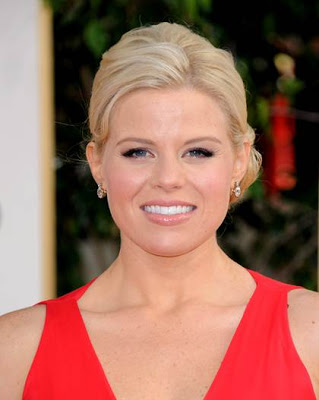 Celebrity makeup artist Coleen Campbell-Olwell created Megan Hilty’s look for the 2013 Golden Globes. “For Megan’s look, we wanted to keep her face soft and simple and make her eyes the focus since she is wearing a gorgeous bold red dress.” Read on for the full beauty breakdown.
“I started off with freshly cleansed skin, then used the Votre Vu Attentive Serum Delicat Pour Le Visage to give her skin some extra hydration and then followed with the Votre Vu Attentive Crème Du Jour.
To create her fresh, simple look I applied the Votre Vu Love Me Deux Moisture Tint and Concealer in Champagne.  For her cheeks, I applied the Votre Vu Vu-On Rouge in Ma Cherry and then lightly dusted the peachy/pink blush from Votre Vu’s Beaute en Bronze on top to give her a soft glow.  I the applied the bronzer from Beaute en Bronze around her face to warm up her skin a little and give a bit of definition.  Lastly, I used the Votre Vu Belle Poudre in Medium to set her entire look and keep her shine free for the rest of the evening.
For her eyes, we really wanted them to pop and be the focus so I began by lining the top of her eyes with Votre Vu’s Le Joli Crayon in Aubergine and smoked it out a bit.  Then I went back with the Le Joli Crayon in Charbon and defined the ends a bit more for depth.  For eyeshadow, since we were going for a smokey but soft look, I used a trio of smokey brown shadows from Dior to add dimension.  Then I applied Votre Vu’s Eiffel Power mascara to lengthen and thicken her lashes.  The Eiffel Power has great staying power and is just an amazing mascara in general which is perfect for the Globes tonight!
For Megan’s brows, we wanted to go with a more defined arch, so I applied Votre Vu’s Arch de Triumphe in Fair which made her brows just a bit bolder without going too over the top.

I think she looks fresh-faced, but formal and beautiful. What are your thoughts on Megan Hilty’s Golden Globes makeup?