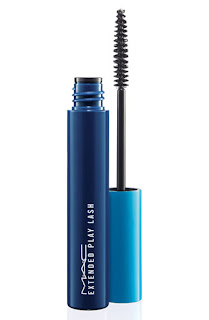 Lately, MAC mascaras have been about volume (Plush Lash), fibers (Prep&Primer Lash) or the blackest of pigments (Opulash Optimum Black.) I was excited to try their Extended Play Lash Mascara as a return to dramatic length. With a super skinny brush (rivaled only by Maybelline’s Lash Discovery) and a thin wet formula, this one is master length in a tube. With one coat, I got major separation. As in every single solitary lash was coated in pigment, extending to the heavens.

With a second coat, I had to be a little careful when pulling the product through the tips; they got just a tad clumpy. Other than that, my lashes were totally separated and (good) spiky. While my afternoon touch-up didn’t result in boosted length, it did reboot the density of pigment at the roots. To top it all off, it came off easily with soap and water.

This is a great alternative to the thick and voluminous lashes that have been so popular as of late. I’d buy this baby.–Ashleigh Ciucci