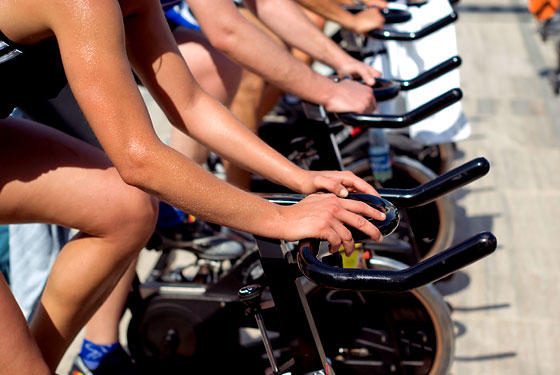 In NYC, where fitness trends change at the speed of light (for the masses, Core Fusion is so 2011, though it’s very 2012 for me). The latest group class with a cult following is SoulCycle, which everyone on Twitter is OBSESSED with. So my gal Denise organized a beauty spin group sesh for myself, Rachael Kelley from Kiehl’s, Jeannine and Kristin. I loved that I worked muscles INTENSELY that I don’t use as much in Core Fusion. My quads and hamstrings have been sore for DAYS which is at once alarming and satisfying. Some things to know before your first class.

1. You need spin shoes.
Yes, I also had no idea that was a “thing.” You “click in” to your bike using special sneakers with metal attachments on the bottom. You can buy your own like Denise, or you can rent them at SoulCycle for $3. If you forget your first time though, they’ll waive the cost because they’re cool like that. Also fun: Complimentary packs of Orbit gum in varying flavors for your convenience either pre- or post-class. I LOVE GUM, so anyone keeping my gum needs in mind is always vastly appreciated.

2. The room is HOT.
Yes, the resting temp is like, 85+ degrees. It’s like bikram in there AND it’s a SERIOUSLY sweaty endeavor, much unlike vinyasa yoga or core fusion or really, any bar method class. Which I for one am moderately uncomfortable with. You will not salvage your blowout. You will need a top to bottom SHOWER immediately following said class. You may even, like moi, get on a bike that’s already… damp from the last class. You will leave soaking wet and you will smell 40 people’s sweat. That’s just what happens. That said, you will get a CRAZY good workout in just 45 minutes, highly economical. If you have wash and go hair, it’s a dream.

3. Sometimes, there’s an instructor AND an MC.
Now this one struck me as kind of odd. I get to class and see an enthusiastic bearded gay on the instructor bike and I thought, greaaaat! And then the lights are dimmed (another aspect of SoulCycle; you bike in what feels like a club. The lights are dimmed and then put back on. It’s great because you can get in your own zone and not focus on comparing your speed with others’ in the class. The music and vibe is what I imagined the interior of My So-called Life club Let’s Bolt would be like.) And THEN, this OTHER queen (his name is Danny Kopel) starts gyrating and jumping around the room telling us all what to do while the instructor does what he says. And I was like… who’s THAT? It all reminded me of The Lion King on Broadway. Have you seen it? Many of the animals are actually elaborate puppet/sculptures controlled by actors you can SEE pulling the strings. At first, I felt totally gypped, like, seriously? I can SEE the dude “behind the curtain.” How much can I get into the magic of this tale if I can see all the behind-the-scenes work going on? But just like with The Lion King, you quickly adapt and find that the MC (the other dude not on the bike leading the class) is actually a value-added proposition vis-a-vis the class. Danny is AMAZING. He motivates the crowd, jumps and dances around, and does everything you do, just not on a bike–squatting, shoulder presses, elbow bending, etc. The class is incredibly challenging, but a lot of fun with him.

4. Unlike your garden variety spin class, this one includes a mini weights sesh. Each bike comes with 1-lb weights for a short muscle-building exercise. Also, after stretching, there are a couple of yoga poses you do and end with a yoga-style “Namaste.”

5. Your tush will HURT.
If you’re not a regular spinner, the seat of that bike will make you feel as if you are still sitting on it for 24 hours post-class. But it’s worth it.

6. You’re supposed to pull UP on the pedals.
This was new to me, as I’d always pushed down. But a gal on the staff told us that this will keep you from bulking up your legs/but AND will help you tone your tummy while you’re doing it.

All in all, definitely a great calorie-burner. At $32 per class, it’s a bit steep, but worth the investment if you just can’t wait to be king–of your svelte bod. Learn more at soul-cycle.com. Start working on your ROAR.

Have you tried SoulCycle? What was your experience? And tell me your favorite way to exercise in the comments.