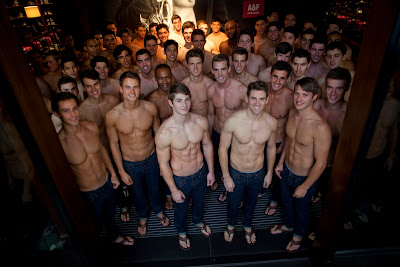 Abercrombie & Fitch pumps gallons of their eau de teenage boy out of their stores so that the entire mall/surrounding five blocks smell just like your boyfriend did in high school. I KNOW. But the brand is going big for Black Friday and I think it’s something you won’t want to miss. By you I mean me, because they’re assembling 60 models at the Abercrombie flagship and 40 at the Hollister flagship on 5th Avenue in New York City.  Read on…
The events were part of the brand’s mission to “bring back the heat” to Black Friday by returning to A&F and Hollister’s steamy roots. Mission ACCOMPLISHED, guys. So this Friday, staffed at every single Abercrombie & Fitch and Hollister store nationwide (817 in total!) will be their iconic shirtless greeters; staffed and ready to PARTY with shoppers at starting at 12 midnight on Friday, November 25. Ain’t no party like a shirtless Abercrombie & Fitch party, I always like to say.

This is the first time in over 5 years that models will be staffed at every retail location nationwide, and the company will also be offering the most substantial Black Friday sales promotions in company history. For specifics, be sure to follow @Abercrombie and @HollisterCo on Twitter and to Like them on Facebook (here and here) for specifics.

P.S. If you need me on Friday, I’ll be at Abercrombie & Fitch in the Willow Grow Mall (my favorite mall, for the record) post-dentist appointment talking to scantily clad gentlemen.