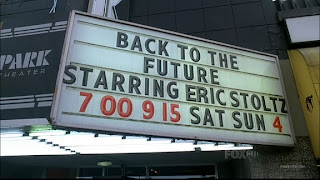 BTTF superfans like moi (it’s my ultimate favorite movie) are counting down the days until the upgraded trilogy set on blu-ray which comes out October 26, just one day after the 25th anniversary of the date when Marty journeyed back in time in 1985, drops. For five weeks in 1984, Eric Stoltz was Marty McFly and you can see the deleted scenes in the new set. Check out the video Nymag.com has posted to see poor Eric playing the part in a far more dramatic interpretation.

I can’t wait to get my damn hands ON this trilogy set.