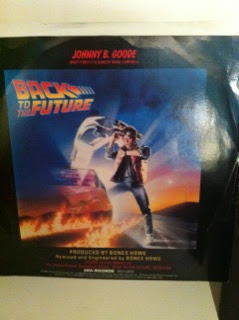 Would you believe that one of the most thoughtful, most ME gifts I’ve ever received was from someone I’ve never even met in IRL? The fabulous LALupusLady (Amanda) who’s a fellow  MAGE BTTF fan, sent me a Twitpic a few weeks ago of a pair of purple Calvin Klein underpants she got signed by Michael J. Fox himself at a taping of Family Ties in 1985, which he signed “Why do you keep calling me Calvin?” EPIC.  The situation is that Amanda went to a  taping at Paramount Studios when she was in high school with a friend who had VIP passes. 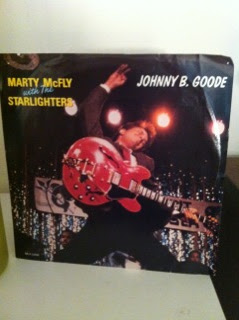 In the long story (which I totally solicited) she started dating the actor who played Alex P. Keaton’s friend Skippy, and attended another taping as a guest. MJF remembered her and gave her a 45 of the single of his rendition of “Johnny B. Goode” from the movie (though it’s actually not sung by him). The promotional record features a faux Marty McFly with the Starlighters cover with a shot of MJF AT THE ENCHANTMENT UNDER THE SEA DANCE. I wonder how many of these were even MADE.


Anywho, doll that she is, Amanda SENT ME the 45 in all its amazing Back to the Future glory and it’s now one of my most prized posessions, occupying very important real estate space on my cool-things shelf where I keep my vintage compacts and epic limited-edition MAC Barbie.

Thank you, Amanda!! Random acts of BTTF are so very, very appreciated by me. It’s my favorite movie ever and I’m so happy to own a small piece of film memorabilia of my very own.

P.S. Amanda also works tirelessly on spreading Lupus information (hence her Twitter handle and blog). To learn more about the disease and what you can do to help, visit lupusla.org.