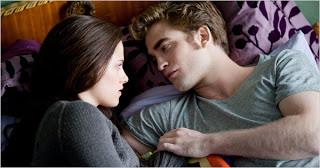 Darlings, The Twilight Saga: Eclipse was sooo bad/good in that way that only vampire fiction adapted to the silver screen can be. You know, like the French have belle-laide? The Twilight franchise has bad/good, meaning the movie is obv no Citizen Kane, but thoroughly entertained me in its sometimes ridiculous, gratuitous exploitation of boys who bring out an inner cougar I never knew I harbored. What’s even more amaze than that is that I managed to HEAR the movie despite being seated with my gal Tamar and some of her fellow work friends in front of THE loudest, most obnoxious movie patron in the history of Glamerica. She was one of those people who, like motorists, who turn up their bass to the point of disturbing an entire neighborhood under the false delusion they’re doing them a favor by sharing their “great” music taste, provided an unsolicited commentary of every single scene at a booming level. She shared her completely moronic viewpoint with everyone so that we had to strain to hear the dialogue. She also, in case there’s a single person on the isle of Manhattan who didn’t hear, is on Team Edward. Anywho. Let’s start with what I liked about the movie.

P.S. In case you missed it, check out my thoughts on Twilight and New Moon.
The Good
Aesthetically, the movie has made major moves into this decade from a sartorial and beauty standpoint. Exhibit A: I loved Rosalie Hale‘s devastating icy violet eye shadow. My guess is that it’s a NARS Night Fairy lookalike, if not that exact shade. STUNNING. I replicated the look this morning on myself.

The production value was vastly improved from both Twilight and New Moon. Eclipse also, refreshingly, makes fun of itself.

Kristen Stewart finally figuratively exfoliated herself of her annoying hair-twirling tic (and I say this as someone who occasionally twirls her hair). She also plays Bella in a far less annoying way. That said, I wish she’d break free, in the words of Freddie Mercury, from her ’90s fashion, which looks like leftover costumes from the set of My So-Called Life. And stop being a mouth-breather. And get a better WIG–wait, was this the section of stuff I liked? More on that later.

The somewhat hackneyed gentlemen of yore so prevalent in vampire fiction of which I never tire. Why? Because in contrast with these total douchebags we’re dealing with here, they’re the cultural equivalent of lemon sorbet. Case in point, see dialogue from the film. Bella is trying to convince Edward to sleep with her (can you blame a girl?) and Edward says: “I’m from a different era. Things were… less complicated. For instance, I was considered a man at eighteen. Had I met you then, I’d have courted you…. and called on you at home. We’d have taken chaperoned strolls, or had iced tea on the front porch. I might have even stolen a kiss or two. And after asking you father’s permission, I’d have gotten down on one knee.”

Chaperoned strolls? Having a drink (a non-alcholic one!) with a boy during the daytime hours–wait, he actually wants to have one BEFORE 11PM–with no funny business in mind? Consider me charmed.

The fact that the total queen next to me squealed “Slut!” when it was revealed that Edward was interested in PG activities while Bella was clearly into getting spicy.

The casting of Leah Clearwater–what a venomous ho, right?

So, so much shirtless TLaut, who’s now legal. Thank you, universe, for small pleasures.

The tent scene did not disappoint.

The Let’s Get Lost song by Beck & Bat for Lashes (clearly the best band name, ever) on the The Twilight Saga: Eclipse soundtrack is my new fave song. I listened to it on repeat my entire walk to work.

The Bad
Jasper suddenly remembers he’s southern and uses this completely new accent with us.

Bella‘s wig–horrendous. There’s one scene where her hair is half-up and she may as well have asked a cat to sit on her head. It would have looked as real.

Edward has reinvented himself as Brandon Walsh with his VERY 90210 sideburns. A subtle nod to Bella’s ’90s aesthetic? Someone call Mrs. Beasley.

BDH (Bryce Dallas Howard) was totally miscast. She’s so NOT a villain. Rachelle Lefevre was IT–she performed that acrid, nefarious role with aplomb. She’s been replaced with a pretty girl with the total WRONG vibe.  Dude, that’s Richie Cunningham‘s daughter. That’s all I could see.

The famous makeout scene DID disappoint. Give the people the full PG-13 rating they paid for. And by people, I mean me.

Overall though, it was definitely worth seeing: It actually exceeded my expectations. I’ll likely blow my allowance on a second viewing sometime this month in-theater. What did you think of the movie? Do tell!