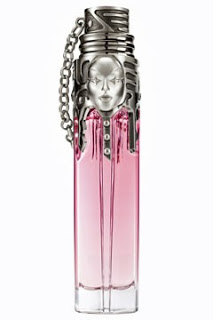 Treading the line between gorgeously chic and the ever-so-slightly unsavory is a uniquely French talent and no one does that as well as Thierry Mugler (pronounced Moo-glair. You’re welcome). In his latest scent, which took four years to create, he combines a pretty cra combo of citrus, fig and caviar. Decadently bizarre, n’est-ce pas? Now, I never met a fig scent I didn’t like, and the latest from Muges (as I like to affectionately refer to him in my head), called Womanity, is no exception.

First, let’s start with that bottle. It’s gunning for a FiFi and I hope it gets one. Its Kool-aid pink juice (I found it a bit Britney Spears until I smelled the scent) is juxtaposed by rocker details like chains and heavy metal. It bears the face of a sphinx, an Egyptian mythological creature associated with architectural structures like religious temples and royal tombs.

This is a louder fragrance than I normally rock–it’s a bit more perfume than perfume. The bright scent opens with citrus and as fragrance guru Now Smell This so eloquently states, “although here the aura is decidedly pink instead of the usual green: it smells like pink lemonade and pink grapefruit accented with pink Pez candy and deepened with red berry-ish fruits.” I can’t come up with a way to describe it better than that. A pretty robust fig note follows, which greens up the situation slightly while incorporating a milky tinge, but once again I agree with NST: This is a decidedly pink fragrance. Next you smell the caviar which is a bit briney/salty. I know. CAVIAR. I feel you: The first thing that ran through my head was, oh, COOL–Eau de Roe? But rest assured: It brings a beach vibe to this olfactory party and I say welcome. Because it does not SMELL like caviar. I want to eat caviar at Pravda with a tall glass of Leninade (so clever, I’m secretly pissed I didn’t come up with that cocktail moniker). I don’t want to exude it. The salty note adds complexity and transforms the scent into a genre not yet chartered. Consider Thierry Mugler and team (headed by Fabrice Pellegrin) the Columbus/Vasco de Gama of fragrance.

The fragrance will launch first on the web in June, then in London at Selfridges on July 8, followed by major European cities and an exclusive to Bloomingdale’s in August. The eau de parfum spray starts at a reasonable $58 for 1 oz and bath and body products will range from $40 to $55. Want to get involved now? The 10 ml size will be $28, and launched at the Thierry Mugler US web store on June 15. In October Womanity will launch at Nordstrom (in the larger sizes); in November other Thierry Mugler retailers will get the scent. At that time, the 10 ml will be exclusive to Sephora.

Have you sniffed Womanity? What did you think?