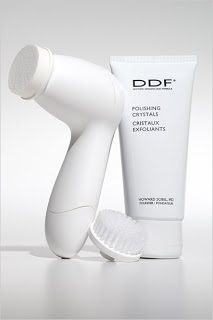 DDF gives the Clarisonic a run for its beauty gadget money with its new Revolve 400X Micro-polishing System ($95). This is no pansy exfoliation tool: It’s SERIOUS business. The DDF Revolve 400X Micro-polishing System reveals smoother, more even skin while unplugging pores like Desmond unplugged that center stone out of the source on the series finale of LOST. Look, I’m not saying clearing my pores is exactly the same as LOST‘s allegorical good versus evil themes, but all I’m saying is that there are parallels. That’s all.

The backstory: So DDF spent years researching microdermabrasion systems–both at-home and professional and found that while there are textrue benefits, it does abraid skin and can result in redness. DDF wanted to put their “spin on skin,” and that included no sandblasting, no scrape/suction and they wanted to focus on energy transfer. The two main points of difference with their device:

2. Instead of using harsh crystals to exfoliate, the DDF Polishing Crystals (which come in the system) are made of sodium bicarbonate–better known as baking soda. It’s an exfoliating agent that works to unclog pores by neutralizing an acidic environment. And I don’t have to tell you how necessary exfoliating should be

I loved the results. I use mine twice a week and found it lived up to its claim that after four uses, you’ll see more radiant, smoother skin. In fact, I feel UP my own face for hours after using this gem. The device itself is lightweight, travel-friendly and battery-operated. It also comes with a Deep Cleansing Brush attachment that you can use with cleanser in between polishing treatments.

Keep in mind: Wear sunscreen after using this product. And while you’re using it, get your hair seriously out of your face. Not just a clip, headband that mess. You won’t be sorry. The rotating spongy head of the device’s rotation can pull hair into its circular motion. The video all the way at the end of this post shows you how to use it. Also, it sort of morphs your face into hilarious looks as it works. (Perhaps don’t DDF in front of your man). It reminds me of Bill Plympton‘s famous Plymptoon’s Your Face, which I first saw in the early ’90s on MTV’s epic show, Liquid Television (at left). In it, a second-rate crooner sings about the beauties of his lover’s face, while his own face metamorphosizes into the most surreal shapes and contortions possible. It’s pretty fantastic.

Get involved with this device, friends. You’ll love the results. Enter code SKINREV at checkout for 20% off.

Disclosure: A sample of the product was provided by DDF PR