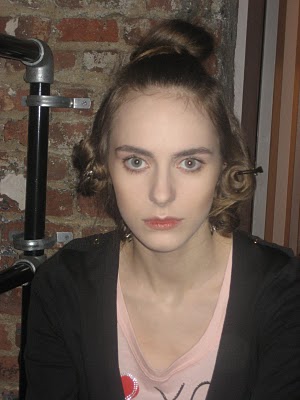 The buzzword backstage at Behnaz Sarapfour’s Fall 2010 collection is “Sattine,” a hybrid of satin and matte.

MAC makeup lead Gordon Espinet created a whimsical effect using caramel bronzes as the focus of the look. “We wanted to have a sophisticated effect, but young,” Gordon explained. “As if a girl just started to use makeup–but doesn’t yet know when to say ‘when.'” Because it was a close-up presentation, Gordon focused on creating a look that would appear soft and blended up close and personal. “Very IMAX instead of regular movie,” he noted. The skin was prepped with MAC Prep + Prime SPF 50, muted with a bit of Mineralize Pressed Powder on Top. Cheeks were contoured with a bit of bronzer, while eyes were defined with tons of MAC’s new Opulash Mascara. A new MAC stain marker in Mocha was used on lips, followed by Lip Conditioner in Soothing Beige.

The “baby grand hair”at Behnaz blew me away. It was totally new and totally fabulous. Ashley Javier for Kerastase might be my new hair boyfriend (happy V-Day, Ash). He created a beehive bun from the top portion of the hair which was plopped atop tumbling waves. To achieve the waves, he wound hair around a curling iron leaving the ends straight out, because not to would be “too toddlers in tiaras,” Ashley deadpanned. The ‘do was flat on the sides, but covered the ear for an Italian, Fellini-esque effect. Ashley used Kerastase Mousse to hold the wave and a bit of hairspray before wrapping hair around the closed curling iron. Ashley also clued me into the upcoming deep conditioning “pearls” from Kerastase made with caviar. It makes hair look virgin again–“shiny from the inside.” Words cannot express how badly I need this in my lifestyle. 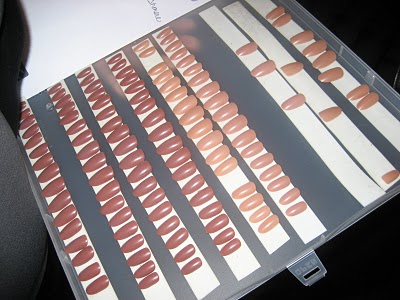 Lastly, the “Cashmere Nail” made its debut, thanks to CND’s Roxanne Valinoti. To achieve the look of a rich-textured sattine nail, Roxanne applied two coats of CND polish in Desert Suede and then added a coat of Super Matte to lighten the color a bit. I loved this, though a matte usually offends me. In this incarnation, it simply yielded a slightly lighter, muted look.