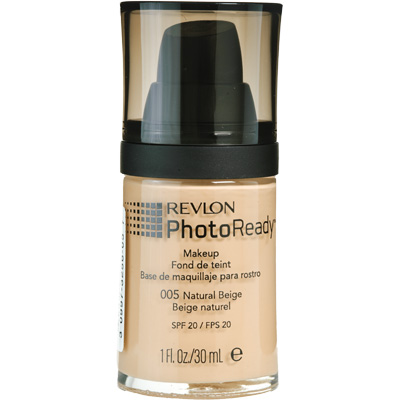 So my friend Elle (who’s really my friend Lauren, who unofficially changed her name, much to everyone’s–including my own–confusion) recently sent me this email:

Why my makeup never stays on past 9AM, a sonnet by Lauren Friedman.

Naturally, I advised her of my new favorite item, which lasts longer than this goddamn recession. It’s the utterly and completely NOT overhyped Revlon PhotoReady Foundation ($14). It is THE FABULOUSNESS. Capital letters, italics and bold font are all necessary.

When I saw that my gal Annie mentioned it on Blogdorf Goodman and asked whether she “needs to get in [her] car and start hitting every drugstore in town,” I was taken aback. And THEN, I watched Makeup Geek do a review of it as well. I was pretty sold by this point. I’m not snobby about drugstore makeup, but I confess that when it comes to drugstore FOUNDATION, well…. I usually go prestige for that. But, consider me glambivilant about nearly every high end foundation I’ve ever fallen in love with because compared to THIS $14 JEWEL, they’re drek. You read that right. THIS Revlon foundation is the best I ever had, in the words of Drake. Check the full review. Comparison: Revlon on the left, Make Up For Ever HD on the right. Stila Yumberry Crush on lips and cheeks.

Revlon PhotoReady Foundation Review: To me, it’s a comparable to a hybrid of Make Up For Ever HD Foundation (a holy grail item) and La Prairie Skin Caviar Concealer Foundation SPF 15 ( a new favorite of mine. Stay tuned for a full review). It provides smooth, even coverage that’s not too heavy and is superblendable. It has a bit of glow to it, without being shimmery. The texture is creamy and almost primer-like. Without BEING primer. Which I classify as totally bullshit, if you want to know the truth. I tried a press sample in Nude, which isn’t quite my color, but is close enough that I’ll probably burn through the entire bottle. And I rarely finish a bottle of foundation, lovies. Anywho, I’m constantly disappointed that things don’t look and function the way I used to envision they would in the future. For example: Why don’t we have flying cars yet? Why isn’t everything the way it is in Back To The Future II? Why aren’t our clothes more Balenciaga-esque on the WHOLE? Why haven’t airlines changed their planes in YEARS? WHERE IS MY HOVERBOARD? Etc. But this foundation? Totally ahead of its time. Bravo, Revlon. You’re ON it.

Anyway, in response to my suggestion, Lauren DID pen a sonnet:

There once was a girl named Elle

Stuck in a situation from hell
Each morning she’ll rise
Lovely makeup she applies
But it just doesn’t stick very well.
So she went to her friend named A
Knew she would have something to say
“It not so tough, doll. Just rock some Revlon Photo Ready Foundation.”
And sent poor Elle on her way.
Now every morning right there
In front of her magnifying mirror and chair
Elle sweeps on the Revlon
Her face lasts all the day
And now it’s totally all about hair.
The End.

Do you love it? I’m working on the next one, which will be in iambic pentameter. Get excited.