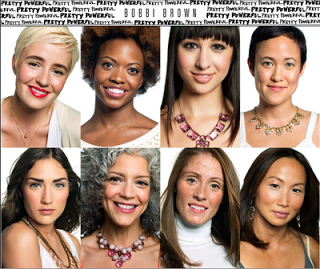 This spring, Bobbi Brown Cosmetics is launching a campaign called Pretty Powerful, celebrating Bobbi’s belief that all women possess natural beauty, and with the right tools, are empowered to a higher level of pretty. The campaign will feature real women, or “Friends of Bobbi,” and their before/after photos, videos and testimonials as the centerpiece content of the campaign, which will live on BobbiBrownCosmetics.com/prettypowerful.

As part of the campaign, Bobbi Brown will be launching a video contest: She wants to hear how you go from Pretty to Powerful using Bobbi Brown Cosmetics. Now through February 9, makeup devotees are invited to share their transformative stories and tips by submitting videos.

From the submissions, 15 finalists will be chosen and sent a personalized selection of Bobbi Brown Cosmetics and the new Color Strips collection to create their next Pretty Powerful video submission. In March, the gallery of Pretty Powerful videos will be open for public voting on http://BobbiBrownCosmetics.com/prettypowerful. For every vote cast in the Pretty Powerful contest, Bobbi Brown will donate $1 to Dress for Success, an organization close to Bobbi‘s heart that provides underprivileged women with interview suits and career development advice.

Bobbi will hand pick the three grand prize winners, who will be flown to New York for a master class and brunch with Bobbi! Good luck, dolls!

Best of all, for every vote cast, Bobbi Brown Cosmetics will donate $1 to Dress for Success, up to $10,000.