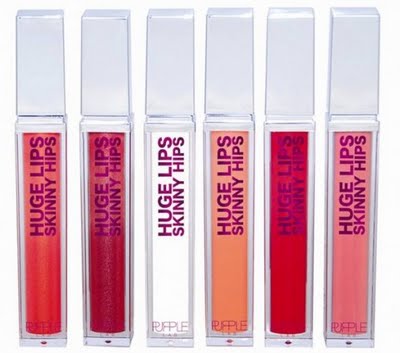 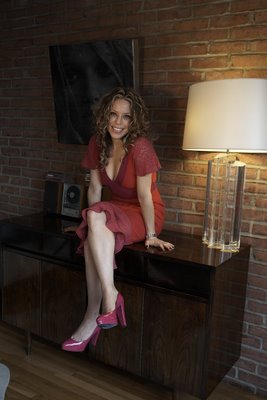 Purple LAB Creatrix, yogi, and fellow raised-in-a-non-sugar-householder Karen Robinovitz decided there should be a lip gloss that curbs the appetite whilst plumping your pout–and thus, Huge Lips Skinny Hips was born. Lest you think Karen is trying to convince you you’ll simply gloss up your lips and the weight will fall off, be assured that the name is very tongue-in-cheek/chic.

And sidenote? Living in NYC, you meet a bevy of blondes (and even brunettes!) who think they’re Carrie Bradshaw. Anyone who’s held a pen, has ever been single, has or does not have curly hair claims to be “JUST like her.” After seven years of living here, the comparison becomes more cliche than… a bunny eating a carrot. However, this former magazine editor/journalist/author who rocks better shoes and designer duds than Mrs. John Preston herself not only is the sole New Yorker I’ve met worthy of the moniker, her fabulousness DEMANDS the title.

Let’s discuss the gloss, shall we? This nonsticky lip lacquer contains Hoodia, an all natural appetite suppressant–it targets the part of the brain that tells you you’re full by mimicking the effects of sugar. HLSKH also plumps without pain thanks to active ingredient Vitamin B3. Former med student Karen also slipped in some orange peel extract, which is a natural metabolism booster.

My favorite part? The gloss comes in six fabulous shades that reference Karen’s favorite icons and general gorgeous things. To name a few: Red Sole is inspired by her love of Christian Louboutin heels, Worship Kate is a tribute to her fascination with Kate Moss, Kitty Poledancer reflects her dancing predilection, and Lychee Martini is a shout-out to her cocktail of choice.

Karen recently hosted a tweet-up to introduce a select group of bloggers to the new Goji Berry shade (which is a soft berry pink, pictured at left) held at the GORGEOUS feng-shui’d out home of the fabulous Libby Weintraub. 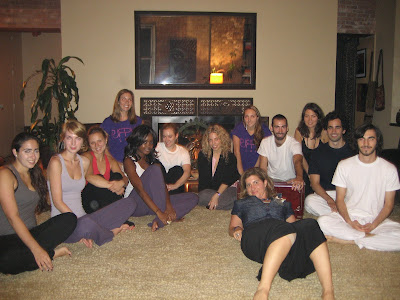 Libby is a yoga instructor and did a mini class with the group while The Didge Project provided instrumentals. For the mini class, we donned Hard Tail yoga pants and pre-ate some sugar free chocolate! Fourth generation psychic Linda Lauren ended the night with a handwriting analysis of each attendee that impressed me with its no-way-she-could-have-known insight. All in all, a fantabulous night out. I left feeling rejuvenated and relaxed for the first time in MONTHS. I then proceeded to feng shui my entire apartment, starting with plugging up my drains (I don’t need my money flowing right through them!) a la Libby.

Get you some of that, stat!